Alex Milne is the third generation tenant farmer at Meikle Gourdas in Fyvie, Aberdeenshire which he runs with his father, Sandy and son, Ross.   The farm comprises of 1,400 acres, of which 1,000 is arable with 400 acres of rotational and permanent grass.  The farm is split over four sites, with the majority of the farm activity concentrated around Meikle Gourdas and Fyvie Home Farm.

The cropping at Meikle Gourdas consists of a mix of winter and spring barley, oats, oil seed rape and wheat.  The majority of the spring barley goes for malting with the winter barley and some wheat retained for feed.  Most of the oats are sent for milling with some retained for feeding store lambs.

In 2017, approximately 40% of the cattle were beef bred animals, sourced throughout Scotland, with the remaining 60% dairy bred and nearly all purchased in the south west of Scotland.  All steers, the animals are bought at around 400-480kgs, with leaner cattle selected ready to respond to feed and fatten as soon as they come onto the farm.  In most recent results, the Milnes have found that the dairy cattle have outperformed the beef bred cattle.

Maxammon was introduced to the farm back in early 2017, when the Milnes were investigating new feeding systems.  Their previous TMR mix included barley, biscuit meal, pot ale syrup and wheat.  This required a full time worker for loading, mixing and feeding on three different sites, a process which was labour intensive as well as costly in terms of fuel.  Chris Barclay from Harbro recommended the Milnes treat their own barley with Maxammon as both a labour saving device and also to make the best use of their own cereals with the added benefit of reducing bought in feed.

Last year the winter barley was treated whole, straight off the combine at 17% moisture, with all rejected malting barley dried and stored for treating throughout the winter.  The barley is bruised and treated as required, with 5% water added when treating dry barley.

The Maxammon treated grain is fed adlib, increasing dietary energy levels and improving performance.  When available, potatoes are also added to the diet and straw is made available at all times.  On Chris’s recommendation, a custom made Beef Max mineral containing Yea-Sacc and Rumitech is top dressed on a daily basis.  This helps improve digestion, feed efficiency and live weight gain.  The addition of Rumitech is especially important as it helps the cattle convert methane into energy, reducing methane emissions and leading to better feed conversion.

The most recent cattle slaughtered achieved daily live weight gains of 1.5kg/d with the best performing at 2kg/d.

In addition to the cattle enterprise, the Milnes fatten over 1,200 lambs, most of which are Blackface.  They are bought in September and grazed till November when feed hoppers are put out.  In previous years lambs were finished on a bought in compound but following good results with cattle, Maxammon barley combined with a bought in blend was trialled, which has significantly reduced the feed bill.  Looking forward the Milnes are keen to try feeding 100% Maxammon diet to lambs next winter.

As well as a significant increase in feed efficiency, the Milnes have seen major reductions in both labour and machinery costs by moving onto the Maxammon system and are keen to expand its use across their unit. 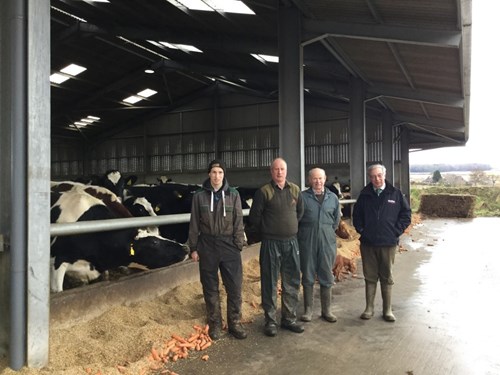