BEEF - In pursuit of the perfect suckler cow

Gill and Malcolm Pye bought their 700 acre Rednock Estate in Stirlingshire in 2014. Having researched and invested in the development of an improved suckler female for the past 30 years, the site was bought with the intention of giving them enough space to run a successful commercial suckler herd alongside their Pedigrees. Today the farm is largely given over to cattle, with a small forestry enterprise being developed alongside.  It is essentially a grassland farm with largely LFA permanent pasture and the better ground used for silage production.

Malcolm had been looking to replace the dairy/beef crosses they’d been using in their herd and discovered the Salers breed on a trip to France. The couple were immediately impressed. Gill told us: “it seemed to us that quietly developing in the Auvergne was the perfect suckler cow. After 18 months of further research both in France and the UK we bought our first Salers in 1990.”

“The great thing about the Salers is the truly easy calving combined with natural fast growth and plenty of high quality milk giving really good 200 day weights ……and this is combined in an animal that is very fertile, long lived and a robust forager with great legs and feet!

Cows often stay productive well into their teens, our oldest cows are 17 or 18 years old. The bulls also have long working lives – it’s not at all unusual to have a customer coming back for a second bull more than ten years after his first purchase! The Salers is the modern beef animal with easy calving giving high welfare, able to grow and thrive on grass in a robust climate giving sustainability.”

Gill leads the Rednock team supported by Kenny McKeague as Livestock Manager and Ben Outterside as Assistant Farm Manager. The team are currently growing a commercial Salers herd using the Charolais as a terminal sire, a cross that Gill believes to be a winning formula. She says “it is wonderful watching these calves grow on their mothers, the Salers X Charolais is a superb beef animal and there is always tremendous demand for them.”

The commercial herd currently comprises of 15 Salers cows running with the Charolais. The team are using a son of the well known Oldstone Egbert who was homebred from semen, and the plan is to grow the herd to around 100 cows. The calves are weaned and sold at about 10 months at United Auctions Stirling and this year they will see the first batches of calves going to market.

On the pedigree side of the business, the Rednock pedigree Salers herd has 85 pedigree females running in three sire groups with:

Gill told us, “We love his superb locomotion and the quality of his daughters, three of which we have been showing this summer where Rednock Molly won Reserve Champion AOBB at Stirling and Reserve Junior Female at the Royal Highland.”

“We bought Drumaglea Kes from Patrick Boyd’s herd on Tiree. He has great depth and fleshing and is bred from two of our best bloodlines, Mithril and Alicia, sold to Patrick as heifers. His first calves were born this year and we are very excited about their quality.

Munro is homozygous polled and following onto the Officer daughters to produce the highest quality polled progeny. The team have also been also showing Munro progeny and his son Rednock Lagerfeld was successful at Stirling (Champion AOBB) and the Highland (first senior bull class).

The pedigree bulls are sold at the major Scottish Pedigree sales in Stirling, Castle Douglas, Thainstone and Carlisle, with some of the bulls, and also the heifers sold direct from home. The Salers breed and the system run at Rednock has been attracting interest from farmers and the industry at large, and the team regularly take visitors around. They enjoy showing and talking about the breed and feel it’s valuable to hear how others in the industry see the way forward.

Calving in the spring/summer, they run a closed herd and only bring in new genetics from herds of the same health status or through semen. They are great believers in the High Health Scheme and are BVD accredited free, Johnes risk level 1, TB4 and also surveillance test for Leptospirosis and IBR in the young stock.

Rednock work closely with their vets, Jackson Vets Ltd and believe that being in Scotland is an advantage as it generally has a lower disease challenge than other parts of the UK. Gill also commented that she feels the industry is well supported in their area by the Scottish Vet schools and agriculture colleges who are driving hard to keep the country world leading in Livestock health and production efficiency. She told us, “we work with the superb team at Glasgow University Vet School who bring young vets to us to be trained in cattle handling, semen testing and disease management, building their understanding of the key livestock farmer / vet relationship.”

Rednock is largely a grassland farm and the forage based production system is a perfect fit for the Salers. Stock that are being weaned and prepared for showing or sales are fed on silage together with Harbro feed. They are fed Beefstock Nuts with Yeasacc, Alkacid and Rumitech as the main diet, a high energy pelleted feed designed to help achieve full growth potential. The inclusion of Rumitech in the pellet helps create a more efficient rumen environment, reducing the amount of methane produced to make more energy available to the cow. This increase in efficiency means the animals perform better but eat less which has had a knock on effect in terms of feed consumed, and therefore cost.

The bulls are supplemented with Pedigree Bull Finisher and Olympic Mash in the final stages before showing or sale. Made from quality raw materials, the product is designed to meet the high demands of the bull in terms of fertility, body condition, health and immunity.

Gill told us about the improvements they have seen in the stock since introducing Harbro feed: “We switched to Harbro in 2016 and saw an immediate improvement in daily liveweight gain and performance in general. Today we’re achieving 1.9kg /day on the sale bulls and feel that the feeding regime allows them to fully express their growth potential, something we’re finding that the majority of buyers want to see.”

Nutritional advice is supplied on farm by Harbro Beef and Sheep specialist David Allan who works closely with Gill and Livestock Manager Kenny, monitoring the performance of the herd to recommend rations that are finely tuned to their exact requirements. Ian Anderson, Harbro Pedigree Specialist also helps provide technical and nutritional support on the lead up to sales and shows, making sure the animals are in peak condition. This season the advice is certainly paying off, with the farm having been successful across a number of key shows and sales up and down the country.

The Pyes constantly strive to make improvements on farm through closely analysing all aspects of the herd performance. All stock are performance monitored and regularly weighed from their day of birth to when they leave the farm. Membership of the Breedplan scheme also gives a valuable insight into the true performance of the genetics they are working with.

Gill reflects on the journey the couple have made over the past three decades: “We feel our greatest achievement is the small part we and other Salers breeders have played in the development of the cattle industry, providing something, that by the end of the 80’s, was urgently needed - a beef animal perfectly adapted to be the ultimate suckler cow. Next years focus is all about continuing to grow the herd; it’s been a great experience so far and the market is growing!” 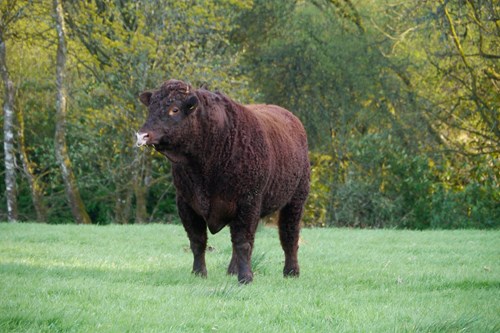