“Tell me what you know, not what you think” was a question posed to me in a recent meeting and its resonance has stuck with me, particularly in this period of uncertainty. Many beef farmers are currently being posed with some hard questions regarding their businesses but often don’t have enough real data and performance information to make informed decisions. The fall back position is that decisions are being made based on what we ‘think’ more than what we know.

As a sector we must follow the focus of the pig and poultry industry which not only strives for more liveweight gain, but is also driven to find the most efficient way to achieve that gain. In the uncertainty and negative financial position that many beef farmers find themselves in at present, facts and figures must be at the heart of the decision making process.

One of our beef customers who I hold in high esteem for the way he drives improvement and efficiency within his business is Alan Meston. Alan’s focus on utilisation of data in his decision making process not only drives his own business forward to meet the challenges of the industry today, but also ours, in maintaining a clear focus on feed conversion as well as the  goal more commonly used within the industry of weight gain. And efficiency goes far beyond his approach to nutrition with his overheads and cost of labour also both exceptionally low and a benchmark for the industry. 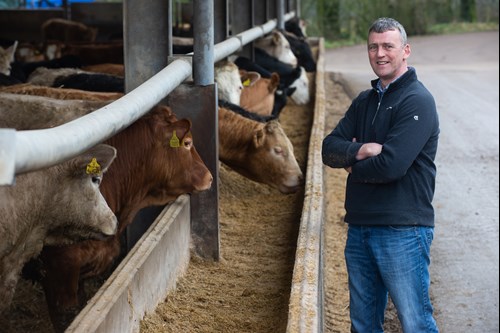 Alan Meston grows and finishes over 3,000 cattle a year, a mix of bullocks and heifers, at Chapelton, near Stonehaven in Aberdeenshire.  Alan purchased the farm from his late father back in 2002 and now farms in partnership with his wife Lesley and son, Stewart. He runs a performance focussed system including cattle that are grown for a period before finishing, and some that go straight to finish. Despite the size of the operation, Alan selects all cattle himself, regularly travelling to marts throughout Scotland along with purchasing from farmers direct. As well as feeding for efficiency, Alan also selects his cattle based on growth potential and feed conversion, in conjunction with animals that will fit the system.

He makes efficient use of the space and resources he has on farm to manage his operation. Cattle are turned out to grass in spring and summer before being brought inside for finishing, with diets comprising of silage, wholecrop, Maxammon treated wheat as well as pot ale, biscuit meal, potatoes and other cereals. Harbro’s specialist finisher mineral Beef Max + Rumitech and Yea-sacc is also fed to promote rumen health and efficiency.

Rumitech improves feed conversion by making more energy available to the animal. It has been used in the system for a number of years and has enabled the business to reduce intake by as much as 2kg DM per animal whilst exceeding previous weight gain. This reduction is worth up to 30-40p per animal per day, which in the current climate, can be the difference between profit and loss.

The whole operation is designed to optimise production at the same time as increasing the health of the herd. This includes isolating new cattle, following an animal health plan and tailoring diets for animals at each stage to promote rumen health as well as efficiency. A reduction of antibiotic use has also been a focus.

Alan analyses and measures everything with the critical KPIs always at the front of his mind. ADWG on farm, including grazed cattle as well as those finished inside has risen from 1.2kg to 1.46kg, with the finishing cattle achieving an average 1.65kg.  The main focus however, is on feed conversion, and Alan has managed to reduce the feed conversion rate from 8:1 to 6.4:1 over the past four years and is continually striving for improvement.

Alan monitors growth regularly as well as recording intake in order to maximise output and meet production requirements. Alan comments, “in the current economic climate, everyone is in negative territory. The industry is hopeful that we’ve hit the bottom of the beef price but whilst the market conditions are way beyond our control, we’re working hard to achieve more from less to make the operation as efficient as possible.”

Chapelton’s fat cattle are sold to McIntosh Donald in Portlethen with the end product destined for the supermarket.  Harbro work closely with Alan to design rations that guarantee the supply of a consistent and premium product that meets the exact requirements of the contract for high quality lean meat with a focus on achieving muscle rather than fat. All cattle attain fat classes of 3 or 4 and grades of R and U and Alan believes that the inclusion of Rumitech has resulted in direct improvements to both grading and killing out percentages which earns the business a premium at the slaughterhouse. In today’s economic climate, this is essential to help them weather the storm and safeguard the operation for the future.