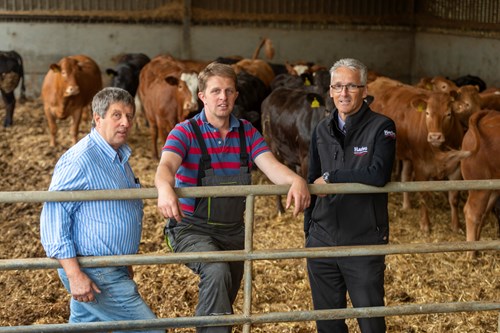 John Thomson is the third generation member of his family to farm at Hilton of Beath Farm in Kelty, Fife. His grandfather came to the farm as a tenant in 1948 where he started rearing heifers for his father’s dairy before moving on to breed pedigree Aberdeen Angus. Having subsequently bought the farm from the Coal Board in 1991, the family have since then acquired two further farms in the village to become the 550 acre site it is today.  It is still run in partnership with John and his wife, Natalie, along with John’s Mum and Dad. In addition, the farm has one employee, Scott Bernard to bolster the on-farm resources, especially at the busy times of year.

The total area farmed by the family is 1,200 acres, with 350 acres on a full tenancy from Fife Council, a further 140 acres on a short duration tenancy at a neighbouring site, and 160 acres rented seasonally (100 acres of grass, 60 arable). The rest of the land is owned. The breakdown of the land is 564 acres arable and 636 grass.

The cattle operation is comprised of 255 black Limousin X suckler cows, plus another 20 pure Limousins, with all cows going back to the Limousin bull. The farm aim to produce quality forward stores and also fatten some too, with 175 cows calving in the spring (Feb-April) and 100 in the autumn (Aug-Nov.) The replacement policy is to bull heifers with half being home bred and the other half bought in. The heifers are calved down at 30 months.

The Thomsons make best use of what is grown on farm to feed the livestock, with 110 acres of winter barley (all of which is fed to the cattle,)  220 acres of spring barley and around 180 acres of wheat. The rest of the arable land is laid to temporary grass.

All straw is retained with extra bought in to supplement that produced on-farm. All cattle are on straw bedded courts and are housed in winter. Once the cattle are housed, John then takes on wintering sheep.

The cattle receive a TMR ration of silage, Maxammon barley, Harbro Grampian Blend, straw and Cattle Max Rearer with Rumitech minerals to complement the treated barley. Spring calvers are fed silage and straw and the back end calvers also receive 1kg of barley. The first 35 bull calves born in the spring are left as bulls and fattened on ad lib Maxammon barley and straw.  John used to bruise his own barley, feeding it with a 34% protein cake, but quickly found that bought in protein costs were escalating. Of equal concern was the health of the bulls when they were nearly fat with the free access to bruised barley putting them at a heightened risk of acidosis with some struggling to stay on their feet. As soon as this happened, John found they started to lose weight rather than gain.

To address this health issue, David Allan, John’s Harbro specialist suggested he try Maxammon. Maxammon is a flexible feeding system which enhances the nutritional value of grain and increases the pH of dry barley from 6 to 9, allowing for higher cereal levels to be fed without the risk of acidosis. The treatment also increases the protein level of the grain by 30%, with the unique form of ammonia protein in Maxammon grain stimulating rumen microbes improving the digestibility of the whole diet.  John comments, “We agreed to give Maxammon a try at the start of winter 2016 and have never looked back. As well as needing to improve the cattle's health, the other reason for trying it was to utilise our home grown barley and reduce the amount bought in protein which Maxammon has allowed us to do.”

“After starting Maxammon in 2016, the first batch of bullocks we sold that winter were sold three weeks earlier than previous years and were 50kgs heavier; I was delighted with the results. I can push cattle as hard as I like using Maxammon and have had no issues with feet or acidosis. All our cattle are tagged using EID and are weighed every time they go through the crush; I'm finding DLWG up by around 0.20kg head/day using Maxammon.”

John sells a large proportion of his cereals and retains the rest for feed. After drying the grain at harvest he used to mix all his cattle feed on farm with the mixer wagon but found they struggled for both time and room with their old bruiser taking forever to get through 60 tonnes. He now uses the Harbro feedmixing service which comes in about once every five weeks during the winter. John comments, the service is fantastic, it is always punctual and they bruise the 60 tonnes in less than 2 hours so doesn't take long! “

Along with thousands of other UK farmers, John is unsure what the future holds but is focussed on identifying opportunities for increasing efficiency where he can. He concludes, “there's always improvements to be made but like everyone we will need to see how Brexit works out and in turn what our subsidy systems will be like after that.” What he is certain about, however, is that Maxammon will continue to feature in his ration as he tries to make the best of what is grown on-farm to boost the sustainability of his operation and futureproof the business as much as he can.