Rumitech fed bulls are the key to maximising output at Garson

Stewart Wood and his son Gareth run the family-owned farm of Garson which is situated on a former wartime airfield at Sandwick, Orkney.  The farm comprises of 500 acres with a further 90 acres taken on a seasonal let basis.   65 acres of spring barley and 10 acres of oats are grown for feeding.

The livestock on the farm includes a 200 head flock of home-bred Cheviot cross ewes along with Texel and Charollais tups, and all lambs are finished on the farm. In addition there are 170 suckler cows, 80% of which calve in the spring with the rest in the autumn. 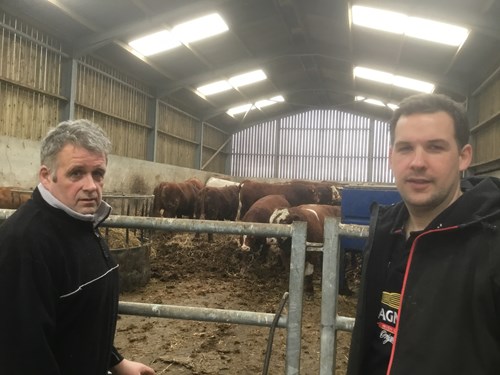 The family breed all their own replacements. The Luing bull is put to the best of the Luing cows with a Simmental bull bought in to cover the remainder of the Luings to produce the Sim-Luing breeding females.   These females in turn are put to the Charolais bull to produce high quality finishing animals.

Stewart and Gareth maintain that the Sim-Luing female fits in ideally with their farming philosophy, to have cows which calve with the minimum of difficulty and which perform to high standards on a low cost basis.

Gareth points out that there is a keen demand for Sim-Luing heifers and any which are surplus to the family’s requirements are offered for sale to other breeders.   There is plenty of interest from all parts of the country in these females as their reputation as dams of top grade beef cattle grows throughout the industry.

The problem with producing these top class females is how to get the best return from the male Sim-Luing animals.

Back in the spring of 2018, it was decided to maximise output from these animals by keeping them entire, feeding them indoors from weaning and selling them direct to the slaughter house at live weights between 650kg and 700kg.   As a benchmark, some of the bull calves were castrated then fed traditionally through the house in winter and sold off the grass the following back end.   The return on these cattle would be compared to the bulls.

It was at this point the Garson men approached Colin Thomson of Harbro and asked him to formulate a ration based on the farm’s own prop-corned oats, barley and silage.

A ration was designed for the weaned calves comprising of 20% Champion Rumitech 35 concentrate, 60% barley and 20% oats and this was hopper fed ad lib.   As the animals grew and their protein requirement decreased, the amount of protein concentrate was reduced.   On average, the dry matter intake from the hard feed was near 1.5kg per day per 100kg live weight, with the DM from the silage 1kg per 100kg live weight. 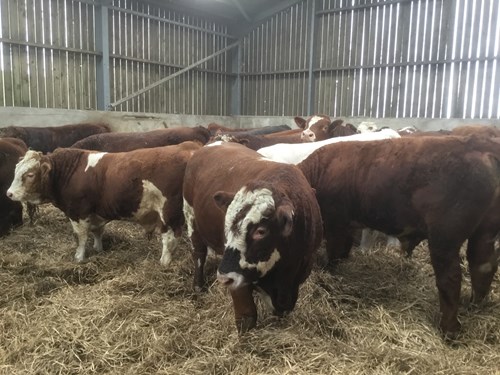 The animals were weighed at the end of January and again mid-February, during which time they gained an average of 2.26kg/day. Stewart, who is a past President of Orkney and Shetland NFU and past Vice President of NFU Scotland, was more than pleased with the growth rates being achieved and told Colin the ration had “exceeded his expectations by far.”

Champion Rumitech 35 is a fully mineralised pellet, formulated with high quality protein, sugar beet, Alkacid, Yea-Sacc (yeast) and our unique additive Rumitech. Rumitech has been proven to reduce methane production, which in turn increases feed conversion efficiency and lean meat production.   It is an ideal concentrate to mix with home-grown Orkney barley.

The first pick of the bulls went to ABP when the animals reached their target weight at 13 ½ months of age.   The average live weight for the entire group was 666kg and they killed out at 55% giving a dead weight of 366kg.   63% graded “U” and 37% graded “R”. Stewart remarked there was a good level of fat cover on all the animals including the lightest ones.  The average daily live weight gain from birth to slaughter of all the animals was 1.50 kg.

Stewart and Gareth were very pleased with the overall performance of the bulls and commented that “keeping them entire had resulted in the money being in the bank much sooner rather than waiting till the end of the grazing season when the control group of castrates will struggle to generate sufficient income at current store prices.”

Moving forward, the family plan to adopt this feeding strategy longer term as they strive to make the best of their home grown cereals and maximise production and profitability on farm. Next time round it will not be Colin in charge of the diets as he is retiring after 35 years with Harbro.   His role in Orkney will be taken by Fraser Moar of J&W Tait.   Fraser is well known in Orkney farming circles and is looking forward to the challenges ahead.