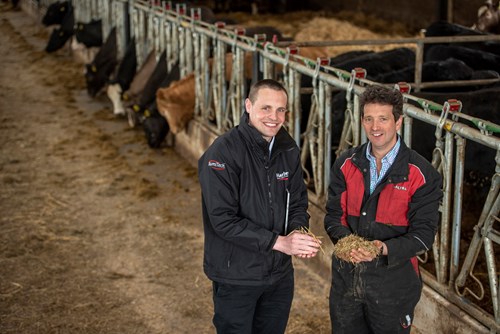 The arable operation run by father and son James and Tommy Clark at Kerchesters, Kelso is the mainstay of their farming partnership but the beef unit dovetails efficiently on their 360 hectare farmed rented from the Roxburghe Estate in the Scottish Borders.

The family, who moved from Fife to Kerchesters in the 1930s grow 145 ha. wheat – destined for seed, distilling and feed, 65 ha. oilseed rape and 70 ha. spring barley for malting with any ‘out of spec’ going for feed. The 60 ha. of grass is a mix of permanent and rotational, used for grazing and baled silage.  The balance of the land is let for potatoes or environmental schemes.

“In the past, our finishing cattle had been fed on rations including urea treated wheat which we made ourselves. We had a few problems with cattle suffering from bloat so Murray Smith, our Harbro sales specialist suggested that we try Maxammon to treat our wheat which quickly solved the problem.”

“Our bull growth rates have increased since introducing Maxammon wheat, with them finishing around four weeks earlier and at heavier weights. Maxammon has allowed us to push them hard, and a recent kill recorded an average dead weight gain of 0.94kg/day (around 1.7kg DLWG) from birth to slaughter, with them achieving a DLWG of 2.1kg over the last 60 days. This is the top draw of bulls so not representative of the average which is 1.6kg but where we would like them all to be!”

Maxammon treated grain results in a nutritionally enhanced, high protein high pH feed for improved animal performance. The pH of the treated grain is typically 8.5-9.3 (based on 4000+ samples tested to date). “With the treated grain at this pH level, we had no fear of pushing them harder and feeding more grain to our cattle” added Tommy. “Feeding Maxammon grain has resulted in them finishing quicker and heavier, putting on 50kg more compared to our previous finishing regime.”

The farm runs a closed herd of 100 head of suckler cows, which from a nucleus of 50% dairy crosses are now mainly 7/8 Aberdeen Angus. The Simmental breed has been introduced into the herd, using them to crisscross the breeding females.

The herd is spring calving and to give them a head start, heifers are bulled a month before the cows (to calve at 23 months of age on 20th February). They get a month with the bull and following scanning, in-calf cattle are managed separately.

Tommy places great importance on providing correct nutrition for the heifers, particularly from 24-36 months. ”You really have to be good to them during this period when they are being bulled for the second time until they have had their second calf.” he says.

At calving, the heifers get out to fresh grass first, their calves are slightly older and the mothers get an extra month before being bulled for the second time. Cows are bulled to start calving around 20th March.

One bulling group (40 or so Aberdeen Angus) are summered on the Cheviot hills, an arrangement that has been in place for over 40 years with the remaining Simmental crosses spend the summer on lower ground. Calves are finished or retained for breeding with males left entire as they give the best feed conversion ratio (FCR). All cattle are consigned to AK Stoddart.

On an annual basis, around 60 tonnes of wheat are treated with Maxammon and 90 tonnes of barley are fed in addition to buying in 28 tonnes of oilseed rape meal. Maxammon treatment increases the wheat’s protein content by 4.3 units, (a 30% increase) and in turn, allows the inclusion of purchased rape meal in rations to be reduced.

Cows are wintered on a mix of oilseed rape meal and barley with ad lib barley straw.  Silage is fed only to heifers and calved cows. Mineral supplements are all supplied by Harbro, using Beef Max for feeding cattle, Beef Cow for cows until Christmas, then moving to Super Suckler in the run up to calving right through to bulling. Omega 25 is also fed to cows for a month pre-bulling.

All males are fed as bulls on a ration of Maxammon wheat and barley, supplemented with Harbro Beef Max minerals with Rumitech; Tommy told us, “I don’t like the ration to be too dry and we had plenty of good silage this season, so added silage as 10% of dry matter to dampen down the ration.” Tommy introduced Rumitech for the first time this season on the recommendation of his Harbro specialist, due to its proven track record of improving grading and killing out percentages as a result of creating a more efficient rumen environment.

Looking to the future, the plan is to breed up to 130 cows which would fully utilise all their buildings. “By finishing the cattle as we do currently and grazing more efficiently, any increase in numbers would be carried on a similar area.” Of the grass, half is permanent and half rotational – the cattle are ideal for it and there is the financial incentive for us to make more use of it.” “The beef enterprise whilst very important financially is quite a bit smaller in output than the arable operation. However, it has a much smaller depreciation bill utilising tractors/telehandlers that we have for the crops out of the busy arable seasons.” says Tommy.

Initially, the Clarks treated the wheat themselves in two tonne batches using their feeder wagon. This would involve a full day’s work for themselves and he admits that towards the end of the day, things maybe weren’t done as accurately as they could be. Last year, Harbro’s Superbruiser was booked to process and treat the 60 tonnes of wheat that are required annually. “It is a far superior system compared to us mixing at home, resulting in a consistent product and the job was completed in three hours.”