The Nicolson family milk 1,200 cows across three sites to the north of Glasgow. The business was started by father Sandy, who is still an integral part of the operation with his wife Carol. Today they farm in partnership with sons Alastair and his wife Rona and Douglas and his wife Gemma. The business started off at the Meikle Camoquhill site in Balfron Station and over the past ten years has acquired two additional farms to make it the thriving enterprise it is today.

The majority of the cows are Holstein Friesian x with some Montbeliarde (Monte), and those kept at Camoquhill are pure Montbeliarde. The Nicolsons find the Montes give them both good milk quality at the same time as good cull prices. The Monte bulls are kept and fattened and the black and white bulls are sold at 3-4 weeks old at Stirling.  The two larger sites milk three times a day with Lower Ballaird just milking twice a day, which works better for the management of the system on that site.

The farm is one of Graham’s Dairy’s major suppliers with milk quality as well as butterfat both key requirements. The farm had been feeding a straights ration made up of soya, rape, maize meal, sugar beet pulp and had previously been satisfied with performance until butterfat levels started to drop slightly. After an in depth review of the system, Harbro dairy specialists analysed the ration and made some recommendations to lift the butterfat. “We looked at the cow signals, tested the forage, spoke to the dairy men and studied the intakes to gain a full understanding of how the cows were performing.”

Although production was good, Alastair felt they were often on the edge of acidosis with inconsistent dung showing clear signs that the cows weren’t making the most of the feed.  The decision was taken to change the whole ration, lifting the starch and cutting back on the protein, and adjusting the pH of the feed to take the pressure off the rumen. 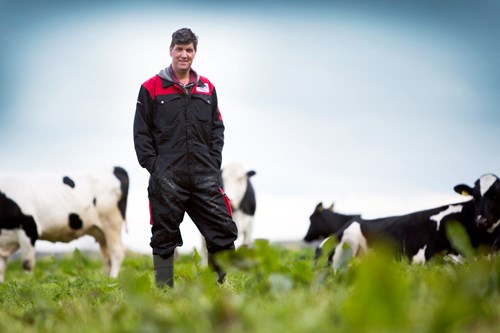 A trial was set up at Lower Ballaird, where there are just 160 cows to test a new ration including Maxammon maize and barley and a Harbro mineral including Rumitech. Maxammon grain treatment increases the pH, protein and digestibility of the whole diet, resulting in improved rumen performance and improved profitability. Maxammon is available as either pre-treated grain or as a treatment pack for farms to treat home-grown or bought in grain themselves.

The trial started in February with significant increases seen after a very short period of time:

Alastair commented that he had been “pleasantly surprised at the improvement in butterfat so soon after the ration was introduced, and without comprising yield. We’ve also seen a significant increase in our days in milk, from 152 to 174, and we already thought our fertility was pretty good.”

Maxammon trials with agricultural universities and research institutes across the globe as well as in the UK have shown significant benefits to health as well as production and fertility and Alastair expects to see improved dung consistency as well as improved foot condition within the coming months.

Although carbon emissions are not currently assessed as part of the Nicolson’s milk contract, the environmental ethos is one that the family are keen to adopt as they look to increase efficiency whilst maintaining a focus on sustainability.

Harbro work closely with the Nicolson family as well as with their dairy men and tractor men to ensure the ration is tailored to the specific and evolving requirements of the herd.

With cow numbers having reached 1,200, the objective at the moment is not to expand any more but to fine tune the operation further with a focus on the dry and transition cows and continuing to maintain butterfat and yield. The positive results seen in the Maxammon trial will see the ration rolled out to the rest of the units as the family strive to maximise both the health and production of their herd across the operation.