Tom Neill is a progressive dairy farmer based at Thornington Farm in Mindrum, Northumberland. The 740 acre tenanted farm is run as one unit along with brother David at nearby Downham Farm, where he keeps 1,800 breeding sheep.  Tom is part of a successful farming family, his other brother Robert, is an award winning beef farmer, who with his successful 300 Limousin cross herd has been voted Mixed Farmer and Farmer of the Year in the Farmers’ Weekly 2017 awards. Tom’s parents are still very much involved in the business, and along with Tom’s wife, Nicola, and children, Emma and Michael, they all play their part.

Today, Thornington has 300 British Friesian milking cows and a breeding strategy designed to have no more than a 20% Holstein influence to maximise the stature and milk volume of the herd. The aim is to produce a cow that will cause very few problems, graze grass when available, and calve every 365 days. The value of a British Friesian steer and cull cow is also a consideration. All male calves are castrated and reared to two years old where they are either sold direct to slaughter or through the store ring at Carlisle Mart. Cull cows are dried off and are also sold through the ring at Carlisle.  In addition to the milking cows, Tom sells Limousin cross heifers out of the dairy cows to his brother, Robert as beef replacements. The Friesian heifers are used as dairy replacements with any that are surplus to requirement sold as milking heifers.

800 acres of grain are harvested across the sites to feed the livestock. A further 1,150 acres are rented seasonally for grazing and cropping from local farms. The cereals grown are an even split between spring and winter barley and winter wheat, with as much of the crop as possible used for feed before any excess is sold. All straw is kept for bedding and is supplemented by local supplies at harvest time behind the combine. Barley, wheat and beans are the base ration for all sheep, youngstock and fattening cattle, with the milkers fed a base ration of Maxammon barley, Maxammon wheat, hipro soya, and soya hulls.  A range of Harbro products are targeted to the varying stages of the herd, these include: milk powder, calf starter pellets, youngstock compound and minerals, dry cow mineral buckets, parlour compound and Maxammon.

Maxammon was first introduced about six years ago as a trial for the fattening bullocks. With performance benefits quickly seen, quantities treated at harvest were increased to allow it to be fed to more of the livestock. The grain is treated at 16-18% moisture, which is within the recommended range. Not only does this save time and money by using the drier less, it also means there is less dust to contend with. Using their own roller mill to treat the grain means the Neills are in full control of the process from combine to animal.

Last harvest they treated 750 tonnes of grain at the higher rate of 25kgs of urea per tonne which increased protein levels from 18.8 to 21.9 on a DM basis and raised the pH from 8.9 to 9.5. The increase in pH and digestibility also allows for more grain to be consumed, with the milking cows eating 7.5kgs of treated home grown Maxammon barley and Maxammon wheat per day through the winter. In contrast, before Maxammon was introduced they struggled to feed 5kgs safely without seeing cud balls and acidosis.

Since introducing Maxammon Tom has seen a significant reduction in bought in feed, particularly soya, as well as reductions in acidosis, cudballs and loose cows. Direct improvements in milk yield and milk solids have been recorded along with secondary benefits such as improvements in foot health, fertility and general cow condition. With the cost of the treatment around the same as the cost to dry a tonne of grain, this increase in performance delivers directly to the bottom line. Tom comments: “Feeding Maxammon has allowed me to maximise the amount of home grown cereals we feed to the cows at the same time as improving milk solids and cow health. Maxammon is a great product at harvest time to cut down on drying grain and increase grain protein levels.”

Tom milks twice a day through a Delaval 28:28 herringbone parlour which was installed in 2015. A new cubical shed was built in 2012 with under floor slurry storage and new silage pits are currently being built for the 2018 harvest. The process of updating the farm is a continuous one. The milk is supplied to Arla and is processed at Stourton dairy in Leeds before it is packaged and sold as Cravendale.

Looking to the future, Tom strives to increase production as much as possible within the land available using meticulous planning and management that includes maximising home grown cereals to increase efficiency. The goal is to nurture a sustainable business which he hopes to pass on to his children to preserve the longevity of the Neill family legacy. 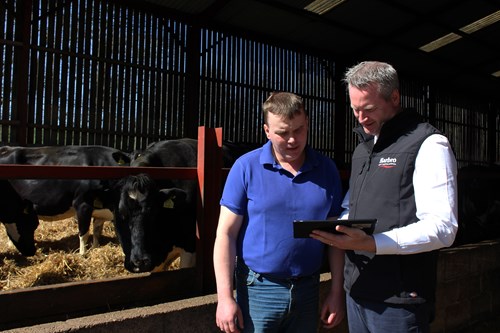 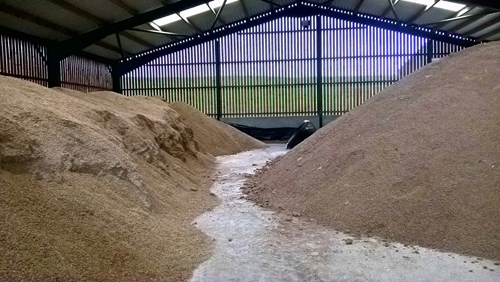