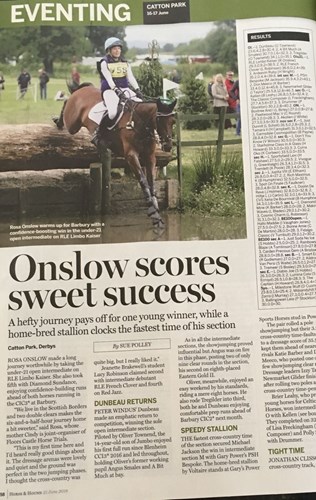 June has been slightly less busy for me as I have only had one event. But after the horse’s week off following Houghton, I have been training hard in preparation for Barbury 3* (I am leaving in a couple of days for). I had a couple of days training with the brilliant HorseScotland performance squad trainers which was seriously beneficial as always. John Ledingham really pushed me in the jump training with both horses flying around a technical 130cm course and Erik really helped me with movements I struggle with on each horse. A couple of days later I headed to Catton park for an OIu21. It was a long journey (6 ½ hours) – meaning I really wanted to jump double clear and have confidence runs as I was travelling so far for an intermediate. Luckily RLE Limbo Kaiser excelled and did a lovely 29.3 Dr - I feel like my hard work in this phase is finally starting to show with him so fingers crossed it wasn’t just a one off mark. He then jumped an immaculate steady double clear as planned. Sunny also jumped a lovely exuberant but steady double clear after a cheeky dr test. I was thrilled to WIN on Kaiser and come 5th on Sunny! I even managed to get my first headline on a page in Horse and Hound with a big photo!

I also spent an amazing day at the Highland show thanks to Harbro, it is rare I manage to get away from the horses so it was a real treat. I was so spoilt and even managed to get sponsor badges as Harbro sponsored the main equine arena there! This meant that me and mum had brilliant ring side seats whilst having amazing food and drinks all day! A massive thank you – I had never been to the Highland show and I most definitely will be going again! It was also very surreal seeing myself on a huge Harbro banner covering the commentator’s box, I don’t think I have ever seen such a big picture of myself so it felt a bit strange!

Since then I have spent a weekend at Ian Woodhead focusing on my 3* dr tests for Barbury. The weather has been amazing and even reached 30 degrees at home. However hopefully the ground will not be too hard to risk running on as it is a very long way to go not to run.!  I have also had some very exciting news that I am now part of Team Devoucoux and I’m being spoilt with a new jump saddle from them along with other goodies!

Barbury is 8 hours away meaning we will be taking lots of Harbro Haylage with us and spending close to a week at the event so I hope it goes to plan! 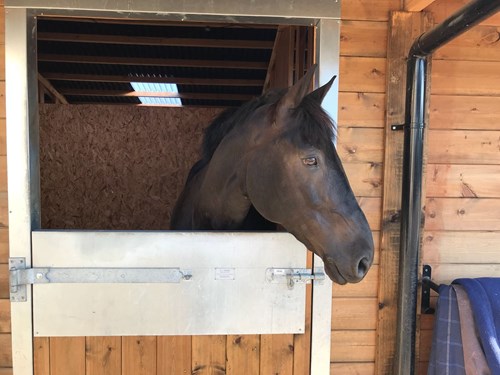 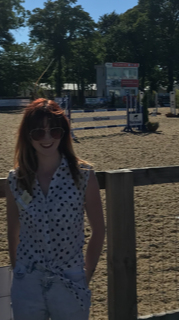 My year hasn’t exactly gone to plan I started the year with big hopes that this would be my year where I could try and prove that I could be an event rider plus hopefully manage to live my dream! This all came tumbling down when Dee jay got injured. However, there is always another year I will just need to keep putting real life on hold until my year comes.   This month seems to have been a month of bad luck!

It started off with Dee jay not really improving therefore, I decided it was time to investigate further. Having already had 12 weeks off (yes 12 weeks with no riding – not been much fun!) and there was still no sign of improvement I knew something had to be up. After seeing the fantastic vets at Loch Leven and doing some further digging we finally found the problem! A massive relief to finally have an answer but also a bit of a blow as I’m now unsure as to if he will ever be able to event again. Since I was a tiny little girl I had always wanted a jet-black horse and as I grew a bit older I still wanted a black horse that was 15.2hh and 8 years old with some thoroughbred in it. Dee jay was exactly that when I went to go see him! Now having had him almost three years and I look back and realise how far we have come and how much he has given me he has a home for life with me no matter the outcome as he will always be my dream horse who allowed me to chase my dream! Morni

To help get my mind off everything my friend Eilidh and I went to the Royal Highland Show thanks to the fantastic hospitality tickets from Harbro!  I had never been to the Highland Show before so was looking forward to the day out watching the fabulous show jumping and of course wandering through the shops creating my wish list.  I did spot the dressage jacket I have been eyeing up, so I had to have a cheeky wee try on.  Maybe one day I’ll be able to aim for 1* again and I can wear that jacket and have the comfort elite dressage saddle that was teasing me only a few stalls down.  It was an absolute glorious day and having never had hospitality tickets at an event before it felt like luxury getting to sit in the sun enjoying some lemonade and watching all the action. It was also cool to see the Harbro banners with Rosa on them around the arena.

After an emotional rollercoaster ride of a month another bit of bad luck seemed to hit! And by hit, I mean hit hard! Dee jay has gotten a bit wired and bored on box rest - I don’t blame him! The vets had said I could take him out for 10 - 15 mins of grazing so one evening when I was up mucking out it was a lovely night, so I thought I would take him for some grass. However, Dee jay decided he would try and take off back to the field and in the process of doing this he sprung up and kicked out with his back legs and got me square in the chest!! Ouch! Thankfully I had been standing speaking to some of the girls on the yard when it happened, so they were quickly trying to help me and got an ambulance called! After a couple scans and x rays for myself it was confirmed I hadn’t broken anything (no clue how!), but I had torn my liver! After a couple nights staying in hospital for observations I could go home on the promise I would take it very easy!! Everyone has been incredibly helpful all helping to get Dee jay sorted and all wanting to make sure I’m ok! I’m so incredibly lucky to have such an amazing group of friends that are willing to help as much as they do!! I’m on the mend just taking things easy but I have to think how lucky I was as that accident could have been a lot worse! Horses are incredibly powerful animals that need to be respected. I don’t blame dee jay for what happened I know how stir crazy I was being in hospital for just two days and now being stuck in the house. I’ve always been a big believer that life is short, and you must do what you want in life. No one is going to make it happen for you so got to grab every opportunity with both hands and go for it. This has just been reinforced with all the latest incidents that have happened. Everything seems pretty rubbish now but we all have those moments but, I am as determined as ever to turn it around as I know I will appreciate the good times even more!! Plus, surely it’s my turn for some good luck 🍀