The month started with team training for the newly selected GB U21 Young Riders Team at Aston le Walls. This included intense dressage and show jumping training under the watchful eye of the team coach, Emma Fisher, but she reiterated that she didn’t want to change anything at this late stage - just give some presentational tips.

The atmosphere was fairly intense as the pressure grew. Meanwhile, Kaiser was sent to livery nearby with Holly Woodhead as he was my reserve horse and had to be near in case Sunny banged himself in the box at the last minute. As it happened, Sunny was his usual tough, relaxed self, and Kaiser was never called up – much to his annoyance I suspect.

After training, we were all told to go home for a couple of days to have a last canter before we met up near Dover for the ferry over….just go home for a couple of days?! They forgot we live in Scotland and so we had to beg a stable and beds from my Aunt who lives in Oxfordshire. We then made our way to the meeting up point near Dover, where the horses, food (including our Harbro Haylage and Conditioning Cubes) and kit were loaded onto the lorry. We also met up with Ali Butler, the Team GB vet, and our Team GB grooms who had been allocated to us. We are not allowed to bring any help from home which is a bit bizarre and very disappointing for Annie Keiller our groom at home, who knows our horses inside out at home.

Once the horses were away, the team and our Chef d’Equipe hopped into a minibus and we were taken to Heathrow for our flight to Amsterdam.

A short flight and another minibus later, we were reunited with our horses at Maarsbergen, the venue for the European Championships. Course walks and final prep followed over the next couple of days. Meanwhile it never stopped raining which is not what I had in mind on a trip to continental Europe!

The Team was then announced. While I wasn’t selected for the team of 4, I was happy to represent GB as an individual. After a respectable dressage, a clear cross country and clear show jumping, I came 12th out of over 65 competitors and 4th out of the 6 GB competitors. So Sunny and I didn’t disgrace ourselves. Team GB won gold which was amazing and the celebrations went into the night. I felt so privileged to be part of the Championships and so privileged to be able to ride a horse like Sunny who we have had since he was a 4 year old.

So back home after a marathon lorry trip from Maarsbergen to Dover to Scotland, picking up Kaiser on the way. Sunny travelled well and is now enjoying a couple of weeks off before we start to prepare for our next competition.

The day after we arrived back, the telephone went, and it was the Chief Selector of the Nations Cup senior team, Philip Surl. Kaiser and I had been selected for the team GB Nations Cup Team at Camphire in Ireland. I couldn’t believe it! And so it was off to Ireland having just arrived back from Holland, in a senior team, of which I was by far the most junior and the only first timer. Dressage went well and then it was the cross country. It was a really tough course, and a tough time. It was all going so well, and then Kaiser had a run out at the second element of a brush shoulder. It was so unlike him and I think he just didn’t understand it. It just shows that when everything seems to be going well, horses bring you back down to earth again. We completed the course beautifully after that but it wasn’t to be our day. Having passed the trot up the next day, Kaiser finished with the show jumping. He had two down but there were many who had far more down. It was a huge championship course and so he acquitted himself well even if it was disappointing. The competition was fierce with Sweden, New Zealand and Ireland’s potential Olympic teams all taking part. It was amazing to compete against the likes of Sir Mark Todd and Tim and Jonelle Price, to name but a few. And what an experience.

So where next? Possibly Blair 4* but I will have to see how they come out of their competitions. They still look amazing and ready to go again, in large part thanks to their Harbro Haylage and Conditioning Cubes.

An unforgettable month….I will keep you posted 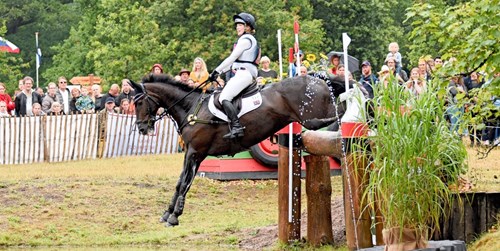