Rarely in life do we meet someone with such passion for pig production as I did on a recent visit to a weaner production unit. The producer in question through modesty wishes to remain anonymous but his attention to detail is rarely surpassed. Being a weaner producer, the number of pigs produced is vitally important but quality is fundamental as well, because piglets below a given weight are not paid for by his customer, therefore these lighter piglets are retained for finishing, never ideal keeping the lightest pigs for yourself to finish. 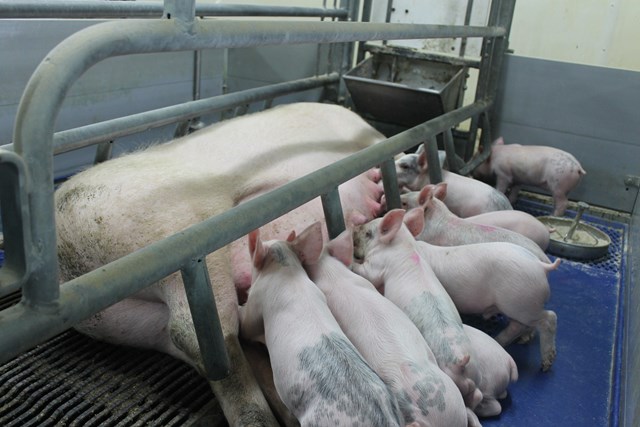 Over the last year the producer has not had an average litter weight below 100kg and has averaged 108.6kg over the last six batches while weaning 14.55 per litter. There have been two main factors leading to this performance, the first of which is breeding. With the herd being both EP and PRRS positive, no replacement gilts are purchased and this helps to maintain the health stability of the herd. Secondly, replacement gilts are selected after a minimum of a three litter history and only from sows with a history of coming on heat in days one or two of the service period. As part of the health stability routine, PRRS vaccination is used and all retained piglets are removed from site on weaning day.

Nutritionally, Dr Vicki Glasgow and Derek Lamb from Harbro liaise with the producer on a quarterly basis, reviewing performance against targets. In a good way the producer in part ‘blames’ Vicki for his current performance; in the most recent batch farrowed, 15.57 were born alive with 15.14 being alive at five days. The more pigs born and survive the more milk is required and the more energy the sows have to consume. If this strategy is successful, early in lactation when the ova are being generated for the next gestation, a high nutrient quality and intake helps the number and quality of the ova. Hence every time the total feed weight and feed energy are increased there is a consequential rise in performance leading also to a rise in lactational nutrient demand, and so the circle continues. 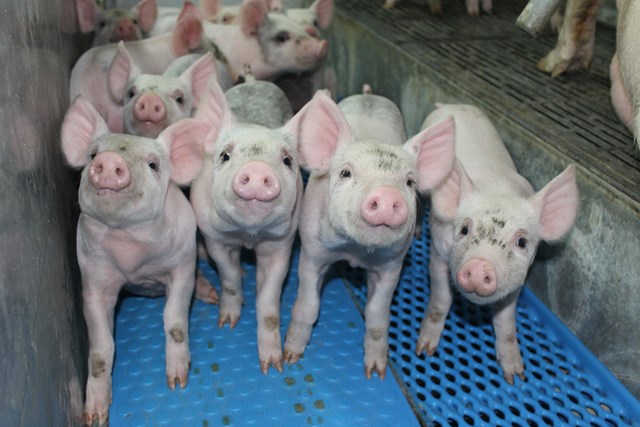 A large part of the sow’s nutritional demand relates to the number of piglets she suckles. Whilst visiting the unit, the batch to be weaned the following day was sitting with a pre-weaning mortality of 3.46%, this in itself represents nearly a pig a litter over that of many producers’ units. There are many reasons contributing to this low pre-weaning mortality, some of which will be discussed later but as a capital investment the producer opted for Balanced Floor farrowing crates (see photo), which if you have never seen them in operation…you should.

A large part of the nutrient intake success is derived from the physical feeding strategy; today many producers still feed twice a day (at 7am and 3pm). The producer in question installed an automatic feeding system from Harbro which delivers at 7am, 11am, 3.30pm and 8pm, seven days a week; previously the farrowing room was fed three times daily. For the last batch weaned APDFI (Average Peak Daily Feed Intake) for the sows was 11.96kg totalling 170 MJ DE per sow at peak or approximately 11MJ DE per piglet suckled. The lactating ration is a meal of very high energy density and is manufactured with one of Harbro’s Troppers (mobile mill). It is worth noting this farrowing room performance is attained without the use of supplementary milk. The piglet strategy is to introduce Harbro’s Farrow Creep Crumble from about seven days of age with a pre-weaning creep of 620g/piglet by weaning day (calculated simply by number of creep bags used per batch weaned).

The producer believes that in the early days of creep introduction the secret to creep feeding is to keep the creep dishes ‘empty’ but giving creep four to five times daily; but from about day 20 the piglets will eat almost as much as they are given. This is something that has been fed back to the weaner producer from his own customer who has commented that the weaners are some of the best he has with regard to early post weaning intakes.

In trying to maximise pre-weaning creep intake, water has a significant impact with location, height and type of drinker all playing a part. Why place a nipple at the perfect height and angle for a piglet sub 10 days of age when peak creep is in the last few days prior to weaning? Why locate the piglet water at the front of the crate when so often the creep dish is located at the back of the crate? Why give the piglet a hard stainless steel nipple to drink from? Why not locate the water near the creep dish, at a height suitable for a piglet with a high demand for dry matter intake to drink from and a drinker from which it is easier to drink? With all of this in mind the producer uses the small drinker bowl shown in the photo, and piglets of varying heights can all drink from it. It has an open surface of water but is also shallow enough that the water is always fresh. Most importantly it is located near the creep dish.

Colostrum management is an essential part of the farrowing room management system and through the night supervision helps to ensure sufficient colostrum is consumed. The unit suffers from and vaccinates against rotavirus, however vaccination only works if the piglet ingests sufficient colostrum prior to gut closure. Research published by thepigsite.com states: ‘The amount of antibodies available in colostrum, as well as the ability of the piglet to absorb them, diminishes rapidly after farrowing. After six hours, the antibody content of colostrum is reduced by one-third and, by 12 hours, is reduced by two-thirds. Further, although the piglets have the ability to absorb antibodies and immune cells until ‘gut closure’ at about 24 hours following the first suckle, after about six hours following their first suckle, their ability to absorb these molecules and cells is reduced to about 50 per cent and progressively declines even further during the following six to 12 hours.’

Part of this vaccination strategy is ensuring good uptake of colostrum with a minimum target of 200ml but closer to 400ml considered ideal. For the unit it is normal to milk colostrum from early farrowed sows and in turn administer this to either small born piglets (<1kg) or to late born piglets within litters. As a protocol this has proven to be a vital strategy in the reduction of pre-weaning mortality and the control of rotavirus.