Andrew Freemantle, along with his wife, Liz and young family run Kenniford Farm in Devon, a high welfare pig farm that has been operating for the past 25 years. After leaving agricultural college, Andrew worked as harvest help on a pig farm before the family purchased the current site at Kenniford in 1993. The ex-dairy farm was bought as part of an initiative to encourage new entrants to the industry.

Andrew currently runs a split site, with the commercial unit at Exton and the farrowing operation and farm shop with café on the Kenniford Farm site. With its indoor and outdoor childrens play equipment and sow and piglet viewing area, the farm is a firm favourite with local families. You can even see the sows wandering between their shed and outdoor facilities which certainly brings the operation to life.

The butchers is also on site, preparing a range of sausages, bacon and ham that is sold in the shop and café as well as to local restaurants, pubs and retailers. In addition, the butchery supplies over 200 hog roasts a year and also prepares meat for a number of catering trailers which trade at country shows and events in the area. The motivation for the diversification originally came from the poor pig price back in 2000, when it was felt that to secure the future of the business, more stable markets would be required to provide additional revenue. When you meet the bubbly and energetic Andrew Freemantle, you can see where the drive for running such a busy and multi-faceted business has come from!

Kenniford Farm is a high welfare unit where the wellbeing of the pigs is integral to the ethos of the farm. Despite the demands of managing the many interests of the business, Andrew takes the time to personally make sure the pigs are well looked after, and he even has a few favourites! We caught up with him walking through his shed of sows, patting and scratching his ‘girls.’ He told us “if you look after the pigs, they will look after you.”

With this philosophy at the heart of the business, Andrew became increasingly aware that he wanted to have a better idea of what he was feeding his pigs, and so made the decision to give Harbro and its targeted nutritional approach a try. The Harbro Tropper (a mill and mixing machine) currently visits the farm on a weekly basis to create a series of targeted feeds designed to enhance the health and performance of the herd. With a basic composition including wheat, barley and soya, the rest of the ration is made up of minerals designed to meet the farm’s health and performance objectives.

Although no cereals are grown on farm, Andrew purchases all his grain from local farms within 30-40 miles of the farm, forward buying up to 12 months in advance to secure a good price. Only the best quality raw ingredients are used, and Harbro regularly test the bought in elements to check their quality and nutritional value. The different rations are all designed with simplicity in mind, the ration is rarely changed and the Tropper guarantees consistency of formulation as well as grist. The end result is a highly digestable feed designed to maximise the available energy to the pig.

The layout of the new commercial site at Exton was designed around the mobile mixing function.  A driveway adjacent to the shed is lined with raw material bins on one side and bins for finished feed on the other. The Tropper parks up in between them, sucking the raw materials in from one side and then once they’re mixed, blowing the finished feed out to the bins on the other. The feed is then distributed by auger into the sheds.

The machine mixes 42 tonnes of feed in 3 hours, a much more efficient process than if they were to mix themselves, with the added benefit that storing the feed in the bins means there is no danger of contamination. At Exton there are four tailored rations mixed each week: with one for link, another for grower, and 2 finisher rations.

Andrew opted for a slatted system at Exton for its health and hygiene benefits. It is a combination of this housing structure along with rations that are designed for optimum gut health that has enabled the unit to go fully antibiotic free. Harbro pig specialist, Jonathan French has a relationship with the Freemantles that goes back generations, he is part of the fixtures and fittings at the farm, knowing all the many staff by name, as well as the intricacies of the nutritional requirements. Jonathan is supported by a technical team including Dr Kev Stickney and Dr Sian Nicholls, both experts in pig health and nutrition with a wealth of practical and academic experience. Sian frequently lectures on the importance of gut health and is in the process of publishing a white paper on the subject. 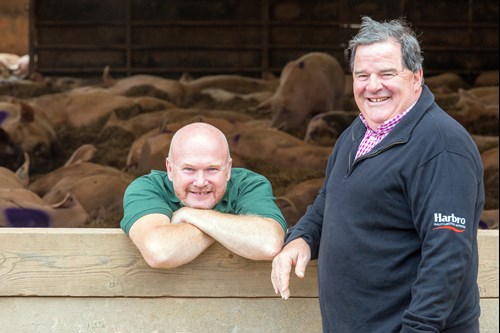 Andrew not only has the expertise of the nutritional team on hand, but they are also supported by a series of technical programmes designed to calculate and forecast performance. One such programme called Pignomics creates ‘What if’ scenarios that provides key intelligence allowing farmers to make crucial business decisions. This is an important tool that Jonathan has used to help advise Andrew in his plans for expansion.

The farrowing operation is run out of Kenniford Farm where the Freemantles’ farm house is based. The sows, which are all Hermitage PRC Large White cross Landrace  are kept on straw based housing with plenty of room to roam outside. Andrew runs a closed herd using the Hermitage BLUP system, using the best productive sows. They run a two week batch farrowing system and quite unusually wean at five weeks of age around 9kg. Switching to five week weaning has not only increased the weight of the pigs whilst producing stronger pigs, but it has also saved a significant amount of money on creep feed, therefore cutting the cost of production.

The farm currently wean 32 pigs per sow per year, a figure that Andrew puts down to good stockmanship. Grant Morrow and his wife, Jo, along with John Payne are overall Pig Farm Managers, with the couple having previously won Stockman of the Year at the National Pig Awards. Andrew tells us, “They’re an invaluable part of the process and keep the busy system running smoothly.”

When it comes to production, 125 pigs are sold each week to Tulip, 30 go through the farm shop and another 40 go to private butchers.  With the rapid growth the business has seen over the past few years, Andrew’s plans for the immediate future are to optimise the day to day running of the business to maximise return on investment, at the same time as up keeping the high levels of husbandry and welfare that he has become so well known for. It is this care and attention to detail that has helped him to win many industry awards, including Pig Farmer of the Year on more than one occasion.