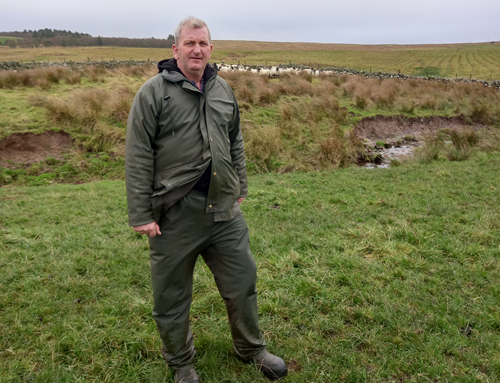 Harbro Premium Ewe has been the feed of choice for John Robertson since 2008 at Crosswoodhill Farm, West Calder, where he manages a flock of 1800 Blackface ewes on behalf of the Hamilton family.

“About 12-13 years ago, we were feeding lamb finisher pellets from another supplier and they just weren’t doing the job.  A neighbour was feeding Harbro Lamb Feeder pellets and getting on great with them. I switched to them and although a wee bit more expensive, they did a much better job.” says John.

“We had the same situation with the ewe feed not performing as it should, moved over to Harbro and we have been using Premium Ewe ever since, purchasing around 100 tonnes annually. Cost is not always important, I would rather buy a better quality product.”

“We enjoy a very reliable service from Harbro too, with drivers phoning ahead of delivery or the night before, and it’s often the same driver who is familiar with the farm.”

John started working as a shepherd at Crosswoodhill back in 1998, and with the retirement of a fellow shepherd and taking on looking after the cattle, his remit expanded and he now manages the whole unit, helped by his shepherd, son Finlay who has worked there since 2019.

120 acres of silage were cut this year but this will be reduced in line with cow numbers which are set to fall from 120 to 50 in the spring of 2022.

The 1800 acres of Crosswoodhill lie in the shadow of the Pentland Hills and the purchase of two neighbouring farms in 2018 increased the acreage to 5000, of which 4500 is rough hill ground. The land lies between 1000 and 2200 ft above sea level. Some of it is pretty exposed and as such, the Blackface are well suited to the terrain, ‘the best breed for the ground here’.

The farm was home to 1000 ewes and with the increase in acres, numbers are being gradually increased through the purchase of 400 ewes and the retention of home bred ewes, which John readily admits have done better, being acclimatised or ‘hefted’ to the land.

Blackface tups have come from the neighbouring Crosswoodburn flock along with a £1600 Glenrath tup and a £9000 Milnmark tup. Most of the Bluefaced Leicester tups have come from son Finlay’s Beeches flock. His flock was established with a purchase of a gimmer from the  Garscube flock for his third birthday in 2006 and now stands at 20 breeding ewes, with a lot of influence coming from Midlock bloodlines.

“We would normally fatten all our lambs but this year with the better trade, we have sold most of them store, with the last batch away on 15 November for £100/head. By the time you took all costs into account – feeding, haulage, ground rent and time spent on them - it made more economic sense for us to sell them as stores.” John takes pride in doing a job well and he says “This will let me have more time to make a better job of the breeding ewes.”

John has been using Harbro Feet & Fertility for the first time this year. “I started using it in September and it’s definitely helping the feet, there’s definitely less lame sheep. Although it has been a bit drier than normal, things are looking positive.”

Ewes are split into two groups at tupping, aiming for the first group to start lambing on 1st April and the second group on the 15th. Feed blocks are fed from then until the switch to Premium Ewe.

The whole flock of in-bye and hill ewes scans at 135-140%. “Ewes carrying Mule lambs are lambed inside whilst the majority of Blackies lamb outside, with triplets being taken in if the weather is particularly rough. There’s always a lot of triplets in the Mules so we always lift one and if not twinned onto a single, it will be fed on an automatic feeder which is a time saver and does a great job.”

Dependent on grass availability, Premium Ewe is fed for six to seven weeks prior to lambing and then through to mid-May. “It keeps them in good fettle pre-lambing and they have loads of milk, that’s just what you want.”

Find out how you can improve flock performance with our ewe compounds: