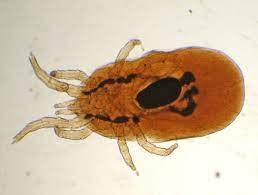 With the warmer temperatures, comes the problem of red mites, which can prove to be a serious issue in chicken sheds when they reach a certain temperature.

Farmlay in Aberdeenshire, one of Scotland’s largest egg production units, now routinely includes our product, Mite Not within its feed to help eradicate the mites.

Following a warm summer last year, greater numbers of red mites were reported in multiple units across Aberdeenshire with the resultant depressed production you can expect from the birds being attacked by such an aggressive and fast multiplying parasite. Once the problem was identified, Mite Not was added to the home mixed ration, mixed with the Harbro Tropper. The product drives the mites away from the bird, leaving them at the end of the shed where they can be more easily managed and eradicated.

Terry Rotherham, Farmlay’s production manager commented on the positive impact the product has had:

“We first introduced Mite Not to the feed last summer when the red mites were starting to have a detrimental effect on health and performance. Although results weren’t seen overnight, within 6-8 weeks the birds re-gained their condition and all round flock performance returned to normal. We now include Mite Not routinely as part of the feeding regime as a preventative measure.”

Mite Not can be included within compound or Tropper mixed rations.

Fill in your details to find out more: