Richard Wilson runs Wairds of Alpity in Arbuthnott, Aberdeenshire. Originally from Ireland, Richard moved to Scotland 45 years ago with his parents and brother who he farmed with for over 30 years before setting up on his own. The farm consists of 500 acres, most of which is grass with 50 acres of barley under sown which goes into the silage pit. Straw is purchased from farms nearby. Richard currently runs 380 cross ewes and 150 breeding cows with the on farm management system designed to benefit both species. 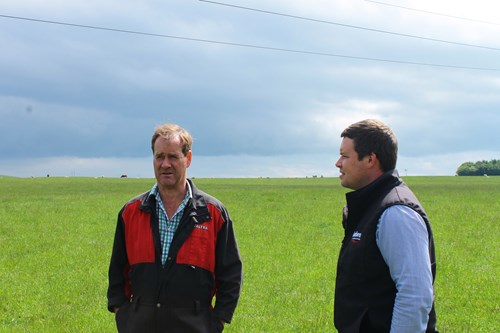 The breeding cows are all Limousins with the stores sold at Forfar Mart and the rest through United Auctions. Richard remarked that there is high demand for the breed at Forfar and his breeding strategy is designed to meet the requirements of this niche market.

For the past three years, Richard has put out Super Suckler buckets both pre-bulling and pre-calving with them left out for easy access during these times. The calving period has tightened substantially since the bucket was introduced, with the bulk of calving taking place between the end of February – April and stragglers cut down to a minimum. This means an even bunch of calves when it comes to weaning and selling which makes the process more efficient and cuts down substantially on management time.   Richard remarked that the calves being produced are good, strong animals with them up on their feet and thriving quicker which he also attributes to the bucket. Calves are then moved on to Beefstock Nuts which fits in easily to the overall system. The cows are fed turnips, silage and draff to which Harbro Super Suckler minerals are added.

For the sheep, Richard relies on Harbro buckets to provide essential health and nutrition benefits throughout all stages of the lifecycle. Having previously had a problem with feet, and finding large numbers going lame, Harbro Beef & Sheep specialist, Peter Oag first suggested Richard try mineralised bucket Feet, Fertility and Worms over three years ago.

Richard told us that he was regularly footbathing and trimming but was not able to get on top of it. This year there have been no instances of lameness or sore feet at all, and since nothing else has changed in the regime, Richard puts the success down to the introduction of the bucket.

In addition to the impact on lameness, there has been a marked difference in fertility with lambing percentages up and a tighter lambing period overall.  The mineralised bucket is also designed to minimise the pressures placed upon the ewe by a worm burden, allowing wormers to be more efficient and successful. Richard commented this was another benefit he had seen from the bucket and was pleased with the amount of clean tails he could see across the flock. 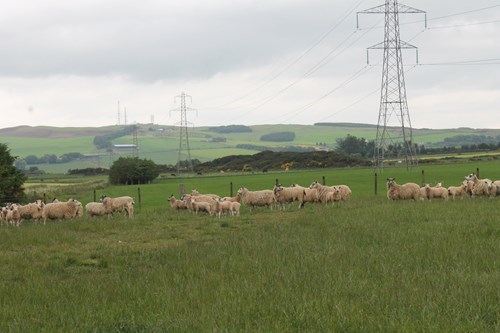 With the sheep having access to buckets all year round, both ewe and lamb receive the nutritional requirements they need at key times. Late pregnancy the choline in the bucket helps promote rapid lamb growth and encourages positive genetic traits with mannans vital for colostrum quality and immunity. The formulation is designed so that both ewe and lamb recover and start to thrive quickly post-birth and Richard has seen evidence of this first hand.

All lambs are sold fat off the farm with the aim of the majority of them being away by the end of September. Richard aims to continue feeding the same regime moving forward as he has proven that the system works. He just hopes the weather is kinder for 2019’s lambing season.