BEEF - Fertility is the key to success at Burnside of Tynet

Brothers Frank and Wilson Thomson run Burnside of Tynet Farm near Buckie in the north of Scotland. The farm has been in the family since 1837 and has grown over the generations with the family having acquired new farms and neighbouring land to make it the enterprise it is today.

Frank and Wilson work full time on the farm, alongside Frank’s son, Hugh and two other permanent workers, Kevin and Cameron, and they employ part time labour to support them at lambing time. Long standing customers of Harbro, they work closely with Ian Anderson, Harbro’s pedigree specialist.

The Thomsons run a tight management system on farm, with a clear focus on fertility to improve the efficiency of the operation. 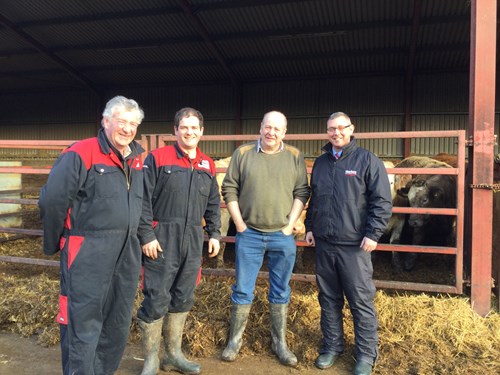 The 200 cows are a mix of Simmental cross, Angus cross and Shorthorn cross, a closed herd with all replacements bred on farm. Their aim is to produce a cow that suits the system, with heifers bulled at 420-450kg to an Angus bull with easy calving essential and the adult cow averaging 650-700kg. The genetics of the herd have been finely tweaked over the years to produce a cow easy to calve but that will also pay well at the slaughterhouse or store ring; it’s a fine balancing act.

A predominantly forage based diet is fed, tailored to the system.  Growing and bulling heifers are supplemented with barley and Rumitech 35, and cows post weaning receive ammonia treated straw and Triple Mag Rolls. Silage and straw are also introduced along with 130g of Super Suckler minerals/head/day and bruised barley to help increase milk production. Cows are grazed extensively during the summer and managed according to body condition. Concentrates are rarely required.

Calving happens once a year with the cows going to the bull for between 10-12 weeks at the end of May. The farm have always had low barren rates but decided there was room for improvement and Super Suckler was introduced to the system in the TMR as well as in buckets. Including zinc, selenium, copper and magnesium, the product is formulated to aid fertility and support calf growth and vitality.  Subsequently, the calving period which generally takes around 12 weeks has been tightened, with 75% of calving now occurring in the first month. This goes on to produce a more even bunch at weaning which makes the process much easier and efficient from a management point of view.

To optimise efficiency further the farm scan early, just one month after bulling, with all empties taken out and replaced with heifers calving at two.

A high health regime is followed at Burnside with the brothers taking preventative measures to protect their herd as much as possible. Despite this investment, they are also mindful of the cost of production, trying to achieve the perfect balance between cost control and performance. Frank commented: ‘If you can’t control your output, you have to look at your input. Our cows are kept at around £1.20 p/d, whereas some cows might be costing closer to £2.00. We’ve been focussed on taking lots of small steps to increase the health and performance of the herd, while also being mindful of cost, which when added up make a significant difference to the big picture.

The Thomsons have also had recent success with their 400 flock of mules, with only five empty and scanning up from 180% to 203%. They put this down to good husbandry, the correct level of nutritional support, and a helping hand from the weather along the way!

The family had always used Energyze Vitality pre-lambing but had used an alternative bucket on the run up to tupping. This year, however, Wilson decided to flush the ewes with Vitality two weeks ahead of tupping as he felt the spec of the product would help to increase their lambing percentage. The bucket contains a formulation of key minerals, trace elements and omega oils that have been shown to improve fertility and performance, and with every ewe in the flock in lamb, this decision seems to have paid off. The Vitality buckets will be made available till turn out, continuing to support the growing needs of the ewe and lamb at this crucial time.

As the family start to clear the sheds and prepare for the imminent lambing and calving period, they are hopeful that their hard work and attention to detail will be rewarded with good results in the coming months.