Keith and Margo Stewart, along with their sons Keith Jnr and Chae, operate Cocklarachy, a breeding and finishing unit in Aberdeenshire. The farm was originally bought by Keith’s grandfather in 1933 and has expanded over time, acquiring an additional unit to become the 600 acre site it is today. The arable side of the business is run as a mix of cropping and grass and there are currently around 900 cattle. The Stewarts do the majority of their buying in the spring, topping up in late summer, with cattle purchased from the length of Scotland from Orkney down to Newton Stewart. They operate a mixed herd, with selection criteria based on growth potential and cattle that will best utilise the current system.

Their objectives on farm are to increase profit through improving the efficiency of the business to future-proof Cocklarachy and keep it within the family for generations to come. Keith Jnr tells us that their philosophy is ‘to treat the cattle well; on top of getting their feed right, ensuring they are well vaccinated and that their minerals are correct, taking care of all the small things, which when added together make a substantial difference to the performance of the cattle, which in turn translates to the profitability of the business.’

Nutritionally, the Stewarts make the best from what is grown on farm; the cattle are housed and finished mainly on grain with the spring purchased cattle turned out, then housed in July/August. They believe the higher proportion of grain being fed is a contributing factor to finishing the cattle in a shorter time frame compared to using more forage in the diet. Harbro minerals are mixed with the feed to boost the immune status of the cattle.

The Stewarts currently achieve very good performance with home grown cereals treated on farm with prograin using the Harbro Superbruiser. This ration includes pot ale, Harbro’s Grampian Beef Max and straw and is fed through the Keenan Pace system. With the availability of pot ale set to drop, they decided to look for an alternative diet.

A trial was designed and managed by Professor Nick Jonsson, of Glasgow Vet School, with Harbro as a partner, to test whether a new alternative protein source would outperform the existing system. The new ration included Maxammon treated barley, molasses and Beef Max with Yea-Sacc and Rumitech; a diet which could be described as intensive feeding. This ration was fed to half the cattle with the existing diet fed to the other. The animals were allocated to groups based on equivalence of breed, age, body condition score and liveweight.  All cattle were subject to the same animal health management and were weighed at the beginning of the study, half way through, and at 90 days, just prior to slaughter. They were observed fortnightly during the trial with measured variables including: indices of animal health (lameness, diarrhoea and pneumonia); daily liveweight gain, days required to finish cattle, proportion of animals meeting specifications, cost of ration and rumen analysis.

David Mackenzie, head of Beef and Sheep at Harbro said that the trial presented a challenge for Harbro, as ‘the Stewarts have been cattle specialists for generations, focussed on getting the best performance from their stock to fit the market requirements, and are already at the top end of what you can achieve.’

The trial came to its conclusion in November 2017 with the cattle weighed and sent to slaughter over a period of just a few weeks. Final recordings were taken and samples of the rumens studied to analyse any contribution the ration had made. Nick Jonsson commented that the trial was one of the best he had seen, not only for the way it was administered and managed on farm including the collation and analysis of a wealth of data but also due to the sophistication of the Stewarts’ handling and weighing facilities and the farm’s attention to detail. “Even on this already high performing farm, the ration, which includes Maxammon as well as Rumitech, has had a significant effect on feed conversion efficiency during the feeding period (Maxammon: 7.16, Prograin: 8.02.)”

Of particular significance were the stats relating to:

Prograin group: 12% were performing at less than 1.2kg/day.

From the farm’s perspective, the Stewarts commented that they were delighted with the end results which saw impressive increases in daily gain as well as a substantial lift to the bottom third with cattle reaching carcass weight at least 20 days quicker than expected.

Looking to the future, Maxammon and Rumitech look to be important components of the nutrition at Cocklarachy, combined with a data driven approach to analyse performance on farm as they strive to increase performance even further. 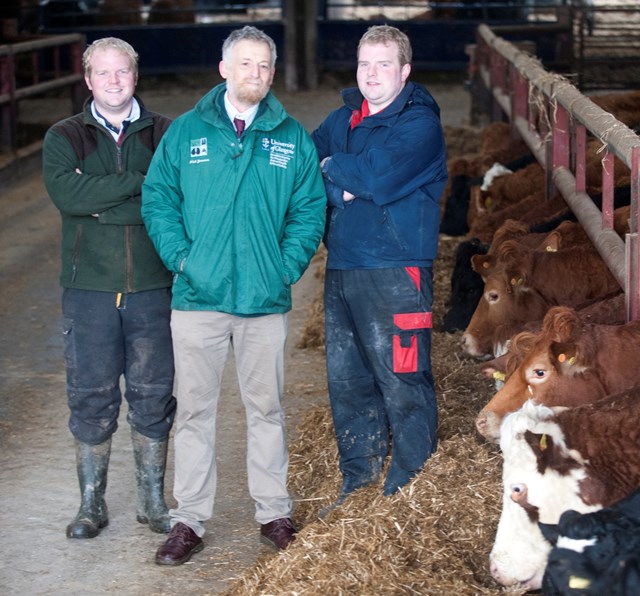