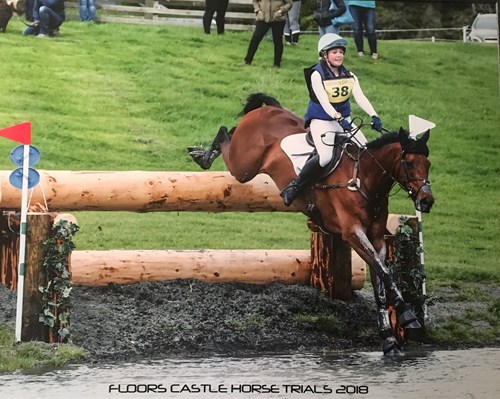 I have had a very busy April with the horses as I have finally got eventing! I started with Kelsall Hill Open Intermediate with both RLE Limbo Kaiser and Diamond Sundance. They both were very over enthusiastic to be back out again but produced decent dressage marks of 32 and 33. Kaiser then had a rusty rider pole but beautiful clear steady xc and sunny jumped a very exuberant double clear. Next up was Richmond Open Intermediate with them both again. They again both did solid dressage but with their excitement slightly showing meaning that they didn’t get the best marks (34 and 35). However they redeemed themselves in the jumping again both jumping Double clear. I was especially pleased with Kaisers SJ as he was so controlled and careful (when he usually is very keen), hopefully his more settled rhythm I’ve been trying to develop will improve his show jumping which use to be one of his weaker phases. In between eventing the big boys I also have taken Foxy, a rising 5yr old, to our local hunt show. He really excelled himself and did a lovely dressage, clear show jumping coming 3rd and just one pole in the WH. We are all over the moon with him as he was only broken at Christmas so is still very babyish! Hopefully he will make some little events a bit further into the season. I have hopefully got a very exciting season planned with some big events I’m aiming for and so have been training hard. I feel I have started to make a real improvement in my dressage, even though it’s not yet showing in our competition marks due to start of season excitement from us all, hopefully they are soon to be greatly improved. Hopefully also I have started to crack Sunny’s show jumping as we have had 3/3 clear show jumping rounds so far and this has been all thanks to the eventing guru Ian Stark helping me whenever he has been back at ISEC and not jetting around the world! We also have just had my first pony ‘Obie’ the Shetland returning to us for his retirement. Aged 26yrs he was struggling after a hard winter but thanks to Harbro’s Horse and Pony Nuts he seems to have bounced back and be in fine fettle! He is now a companion to help keep the wild Sunny calm in the field! Next month I have Floors Castle 2* on both big boys followed by Houghton CCI2* National Young Rider Championships. Fingers crossed !! 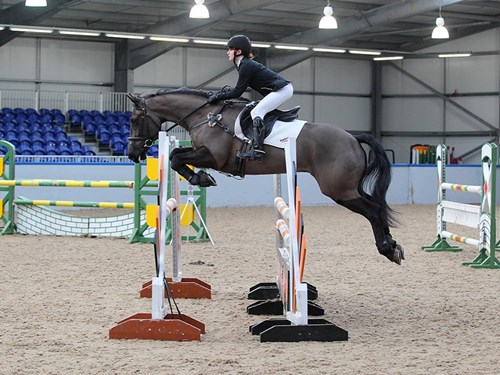 The best laid plans never work out especially with horses!!  I’m very much aware that no plan every truly works out as expected, the goal posts must be moved on numerous occasions and for that reasons I always have a plan A, B, C, D, E…  and most of the time I end up on plan Z! However, since my last update my plans have gone out the window!!

Dee Jay had been feeling a little bit weird but nothing I could put my finger on, nothing obvious or physical but when I took him cross country schooling for the first time this year he just wasn’t as bold and enthusiastic as normal.  I put this down to the first time out as he had been show jumping so well over the summer.  I then went to our flatwork lesson the following week as per usual and he was fantastic really listening but being a bit lazy which he can be as dressage is not his most favourite thing in the world!  Then the next week for our fortnightly show jumping lesson he was backing off fences which really is not like him at all as he has got to be one of the most honest horses ever!!  He will take any fence on at any angle on any stride and will always try his best to get us over it.  So, I decided to give him some time off to chill and relax.  While he was out chilling I made sure he had a full M.O.T!

After being unsure what the problem was a diagnosis was finally given by my vet which was a lot better than I had feared!! Now all Dee Jay needs is more time to rest before he can come back into work.  A rehab plan has been agreed with my vet to take it slowly so come the beginning of June we will be doing 5 minutes of walk work a day. Then gradually building the walk work up before introducing trot work.  Now the only issue with this is that someone needs to tell Dee Jay that walk work actually means walking!!!

This does however mean that my eventing season has came to an end before it even started this year which I’m beyond gutted about, but my boy should make a full recovery and we can aim for next year!! The joys of being an amateur event rider with only one horse!!  I had everything all set up for this year, training had gone so well, Dee Jay was feeling mega thanks to his fantastic Harbro diet, I was feeling a lot fitter plus having so much support behind me and the help of my awesome trainers, but bad luck and bad timing has put a stop to it all for this year.  I am going to have to remember how to ride again once I get back on board as not having a horse to ride isn’t much fun, but I am even more determined to try and reach my goals for next year!!

Now no longer able to compete I am helping my friend this season who has a similar set of aims and goals I had.  I know how difficult it is to do events on your own so I’m top groom and mediocre videographer for the year.  I have realised my nerves are so much worse standing at the side lines.  I am that person standing at the side of the ring riding every stride and willing it to go well – turning into the pony club mum!! I am glad to report though that events have gone incredibly well even picking up a nice wee rosette! They have come so far already and it’s incredible to be a part of their journey to watch them grow as a combination and see them soar!!  Plus it means I still get to go to events and have a laugh with everyone but it does also mean I still have those awful early alarms…..