We are now deep into the eventing season, although the level I am now at means that my top horses do not compete that often…typically once every 3 weeks.

I am absolutely thrilled to be able to tell you that I have won a place on the Horse Scotland performance Squad for a further 3 years. This means that they help financially, but just as importantly, I get fantastic regular lessons from John Ledingham (show jumping) and Erik Mackechnie (dressage). In addition I get support for fitness and dietary advice.

Prior to competing in the Advanced class at Chatsworth, I had one of my regular jumping lessons with Ian Stark OBE. He does not pull his punches and his lessons are exhausting, but I am so lucky that he is prepared to put his precious time aside to teach me. As I walked into his arena with my horses, the first thing he said was how amazing the horses looked, and what did I feed them on? Answer….Harbro conditioning cubes and Harbro chaff. He does not give compliments often!

So then off to Chatsworth. I was competing in the Advanced class on both Kaiser and Sunny. The cross country course was built by Ian Stark, who once told me that if you can get round one of his courses, you are ready for the next level up. Both did good dressage tests, after I had been warmed up by Tracey Woodhead, who is brilliant at keeping me and the horses calm before going into the arena. Kaiser then did an amazing double clear to come 9th, and Sunny surpassed himself to come 3rd. This was against some of the top riders in the country. I was so pleased.

Then it was back home for more training, before the Young Rider Team GB trials at Houghton towards the end of the month. We set off for Norfolk from Scotland, and went via Heidi Woodhead in Yorkshire, who put me through my dressage, show jumping and cross country paces. I find this invaluable as it gets my eye in.

I had entered the CCI4*S Nations Cup competition at Houghton, with 9 teams and over 120 top riders in the competition. Sunny did a good dressage test, but Kaiser surpassed himself with 29.1, lying 10th at the end of that phase. The marks were incredibly close as we went into the show jumping. Sunny had one pole down (my fault) which dropped him about 30 places! Kaiser went clear. He was then lying 8th as we went into the cross country. Sunny went clear, with a few time faults as I didn’t push him. Kaiser also went clear in the time (I came in bang on the 7 minutes allowed!). The end result was that Sunny came 42nd, and Kaiser came 3rd, beating all the nations Cup teams. I was the top British rider and the top U21 rider of all nations. I couldn’t believe it. I have now been long listed for the Team GB u21 squad on both horses. There is a final selection competition at Farley Hall on 22nd June, where the long list of 8 will be reduced to the final squad of 6. 4 will be in the team and 2 will ride as individuals. No pressure then!

Meanwhile well fed horses are happy horses who give their best. Thank you Harbro for being one of the main contributors to our success so far. 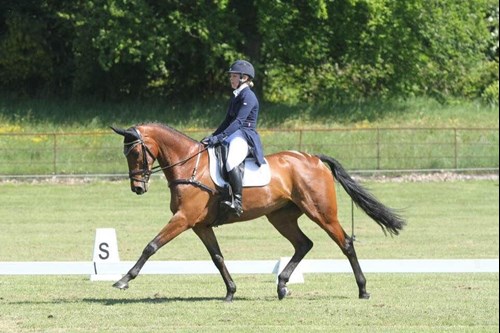