Harbro is now well established in the equine community, we have our own range of high quality and competitively priced horse feeds which are available through our network of country stores.

For all those other equine essentials we also stock equine wormers, grooming accessories, yard equipment, rugs, hats, clothing and footwear, so we are definitely the one-stop shop for all your equestrian needs. 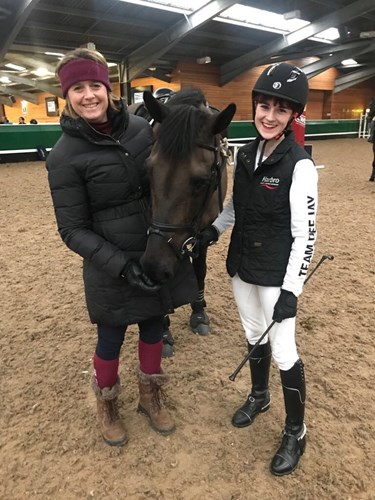 Right winter its time to see the back of you now!!

Its been a couple months since my last update and well the weather, as usual, in Scotland seems to be the constant battle.  The past few months have been a bit of a whirlwind with preparation for the event season and the never-ending winter that seems to be looming.  As well as a new “adult” job thrown into the mix as well.

My event preparation got a kick start with a lesson from Pippa Funnel which was incredible to learn some top tips from one of the best and to get some nice positive feedback.  I have followed Pippa’s success over the years and couldn’t believe how lucky I was to receive such an awesome Christmas present.  Following the success of our lesson, I decided to enter our first BSJA show together.  Luckily my good friend Eilidh who is an avid and very talented showjumper came to lend a hand as I had no clue what I was doing.  After about the 100th question I think I finally understand the basics but do not ask me what a7, a5, a3 all means, and I thought eventing rules were complicated…  Not only did Eilidh manage to explain to me what was going on, but she also helped me warm up which was a massive help as I’m not used to having someone on the ground helping but also managed to save the day by bringing her boots with her as my event buddy managed to forget to pack their show boots.  In the discovery class, Dee Jay jumped amazingly well and went clear in the first section meaning we moved straight into the second section which I was not expecting so got a bit lost and very unluckily had the last pole down.  We then went on to the 1.05 class which apparently was a speed class so a nice twisty course which to my disbelief I had enough control to take all the shorter routes and again just unluckily having the last pole, but the fastest time of the day meant we fished in 6th position.   I was absolutely over the moon and shocked with this result as show jumping is not our strongest point.

Following on the back of this came the beast from the east parts 1 and 2!! Resulting in no riding, a stable bound horse and lots of mucking out!!  Dee Jay was loving his treat every evening of getting some harbro haylage and for although this winter has definitely been tough deejay is looking amazing which his fantastic harbro diet is playing a huge role in.

Once the beast from the east decided to depart training was able to continue with some fantastic flatwork lessons from Adrienne and show jumping lessons from Stephanie.  I also had another trip to SNEC for my second BSJA show but this time I entered the 1.05 and the 1.10!!!  The 1.05 was a speed class again which I’m sure Dee Jay remembered from last time as he was pulling my arms out my socket.  Due to a slight lack of control, we had a couple poles down but overall a very nice round.  I then had to walk the 1.10 course which was no mean feat!!  There was everything thrown in there, a triple, dog legs, doubles, related distances, water trays you name it and it was in that course.  As I was walking it I was thinking everything was huge!!  Dee Jay warmed up so nicely, so I went in with the game plan of taking each jump as it comes and retires if it wasn’t feeling right.  There was no need to retire as Dee Jay was awesome he took everything in his stride and flew some of the big meaty oxers.  We had a few poles mainly due to rider error but considering this was only our second attempt at BSJA and the biggest show jumping track I’ve jumped to date I was beaming from ear to ear with the result.

After about 5 attempts I also managed to get a cross-country training in at Lindores equestrian which is a fantastic training facility and not too far away from home either.  Sue Hendry was coaching, and it was so nice to get back out doing what we love.  I was a bit rusty and the training session was just what was required to dust the cobwebs away.  With Lindores fab new water complex meant I was able to try my first jump into the water which deejay didn’t bat an eye at and even managed the whole combination first time.

Now we move forward into spring (supposedly!!) and Dee Jay is still double rugged and events are getting cancelled all over the place I begin to think that the whole years plans are disappearing rapidly but, then I realises how lucky I am to have such an incredible horse who has so much heart and tries his best at everything I throw at him (which is quite often a lot!!).  I can’t give up on that or my dream, so I keep on trundling through the mud and the preparation continues for the day when we get the run as tomorrow is always another day. 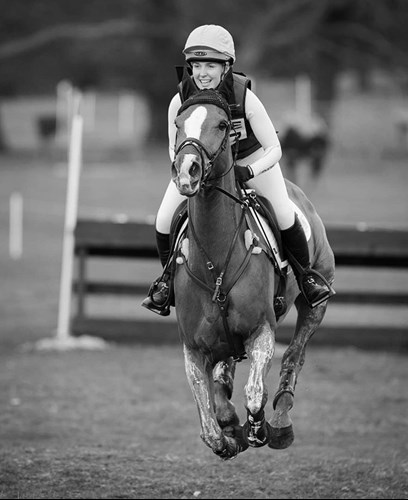 I am afraid my February was very quiet on the horse front as I was away and at home we were totally snowed in. Meaning no riding at all and my poor mum and super groom Annie’s days consisting of battling with the snow to even get our horses out in the field! I did manage to ride a bit in Colombia, which was very different. Being in 40 degrees and on a narrow 13hh pony. It was an amazing experience although not quite the same feeling as Kaiser and Sunny!

I have had a very hectic last couple of weeks as I have just got back from travelling in South America. Although it was the most amazing experience, I did miss my horses and was envious of anyone starting to event. However, due to the most awful weather across the UK absolutely EVERYTHING seems to be cancelled! The day after I got back home I Had a lesson with Ian stark, it was so helpful as he really did brush off the cobwebs and got me going again. A favourite comment he made was “I think you have left your brain on a beach!” A couple of days later we headed to Yorkshire for lessons with Ian Woodhead. I had 4 lessons in total, all of which were SO helpful and really got me excited about the season starting. He mentioned that he thought the horses were looking/going the best they ever have. This is all thanks to the amazing Harbro food which has made them ‘winter’ so well.

We also have some more very exciting news at home as whilst I was away my parents went to Ireland and ended up buying two new horses. One a very green 5yr old hunter, which is the clone of our other hunter. The other a 6yr old called Ringwood Neptune. Although he is 6, he has done absolutely nothing and we got him straight from the stud after breaking. He is extremely talented, but very babyish and feisty. So fingers crossed he will make it out for some low level eventing towards the end of this season.

I am now currently starting to organise all my eventing kit and getting excited about my first event being entered. I am starting with an Open Intermediate at Kelsall Hill in Cheshire. I had forgotten how hectic the start of the season is, realising what kit you are missing and trying to train as much as possible. I am sure both boys will be explosive at their first events, so fingers crossed there are no disasters. I am also about to go for my annual trip to Somerford Park for XC and SJ lessons with Jumping guru ‘Andy Hefferman’. His lessons always contain a serious breakthrough with my horses and a lot of harsh words on how I can improve. But I find they set me up for the season and get me on the ball!

I also have HorseScotland training coming up which will be very helpful. I am so excited for the whole team there to meet the newest member of the team – ‘Neptune’.

A busy next month ahead as I start eventing again. Until next time!

Leigh-Ann Allan, 21 from Perthshire competes in eventing at BE100 but her aspiration is to progress to novice with her overall aim to compete at a 1* level at Blair Castle International Horse Trials.

Rosa Onslow, 19 from Hawick is already achieving great things in eventing she was longlisted for GB Junior Team 2016 and will be competing in her first advance and 3* competitions in the coming weeks but her aspiration is to progress to the Olympics for eventing and to gain a place on GB teams.