DAIRY - Milk Monitor Update - What is an efficient diet?

When we think about improving efficiencies, the key areas that we are typically told to focus on are reducing our feed costs by using more forages and home grown feeds and buying in less concentrates to increase our margin over purchased feeds (MOPF). In reality however there is only one true measure of feed efficiency and that is money in minus money out: What are your monthly feeds cost and how big is your milk cheque at the end of the month.

So rather than focussing on whether the feed is bought in or home grown, the most important question we should be asking ourselves is “Is this feed good value for money or can I buy in something that is cheaper and/or higher in feed value?”. Recent information gathered by Milk Monitor has shown that even the current focus on feeding more forage doesn’t automatically mean you will have more money in the bank at the end of the month. In contrast, the data actually shows that the less forage you feed, the more milk you will produce and the more money you make (see fig. 1 opposite). This is because the most important driver of feed efficiency and herd margin is not your ration cost, but is in fact your daily milk yield.

Because milk yield is driven by energy, the higher the energy density of the ration the more milk you can produce. So, although there is a place for high quality forages in these rations, for the typical UK dairy farm, concentrates will always provide more energy than any home-grown forage and it is for this reason that the more concentrates you can safely feed, the higher your milk yield will be, the more money you will make and the higher your feed efficiency.

So what should your performance targets be?

The information gathered by Milk Monitor so far has provided us with a unique and unbiased assessment of the current performance of UK dairy farms and has highlighted just how big the actual range is in terms of UK farm profitability. This is of course to be expected as in any industry but rather than being seen as a problem we should instead view this as an opportunity because if you measure you know where you are, and if you know where you are then you know where you need to be. 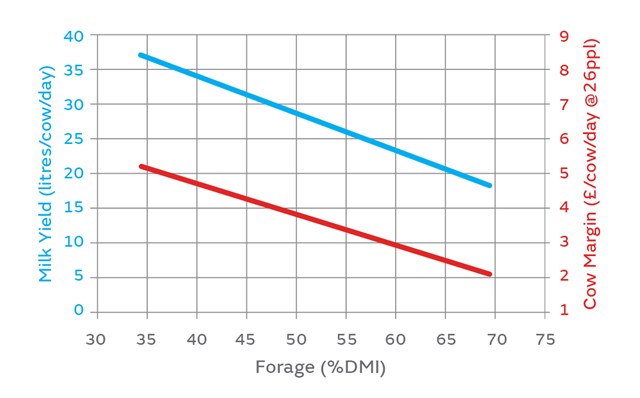 Graph above - Effect of forage, as percent of dry matter intake, on milk yield and cow margin in the dairy herd. Milk Monitor figures as of 14/09/2017

Brian Yates at East Logan Farm, Castle Douglas has a 280 cow herd, which are calving all year round and average 35l/ cow/day.

Brian Yates’ was holding back milk production at East Logan while milk prices fell to as low as 18p/l on his contract.

“When prices picked up to 26p/l we wanted to increase our production by a litre/cow per day,” Mr Yates said.

As a Milk Monitor farm Mr Yates worked with Harbro to look at a range of factors that could be improved rather than simply buy in more energy and protein. The data showed dry matter intakes were fluctuating, causing yields to vary across the herd.

“It seemed we followed a pattern. The mixer wagon was putting out 7t one day, 7.2t the next, and so on until it climbed to 7.5t. Then there would be a crash in intakes back to 7t and we would see 500kg left in the trough,” he said.

The problem appeared to be the ration mix. Some cows were pulling out the palatable elements of the ration and ignoring other parts.

“To combat the problem we were encouraged to add a total of 12l of water to the mixer wagon along with a small amount of a fat-based product,” said Mr Yates. The effect was the feed was bound together so the cows couldn’t pull it apart as easily. Within a week the data showed the extra litre target had been achieved.

“The extra feed cost was held at about 13p/kg so the added milk yield gave us a healthy extra margin,” Mr Yates added.