For the Wilsons at Carskerdo Farm in Fife, the dilemmas facing them a few years ago were no different from any other dairy business. The family had long been involved in dairying having moved from East Kilbride to Carskerdo in November 1995, with the cows following in May 1996.

A long and hard evaluation of the business was made, asking “Do we expand or get out?” The decision to keep going and expand numbers was made in the spring of 2013 and on the back of that, many key improvements were made. The 16 x 16 herringbone parlour was replaced with a 40 point rotary parlour on a greenfield site. New cubicles were added taking accommodation for cows to a target number of 400. 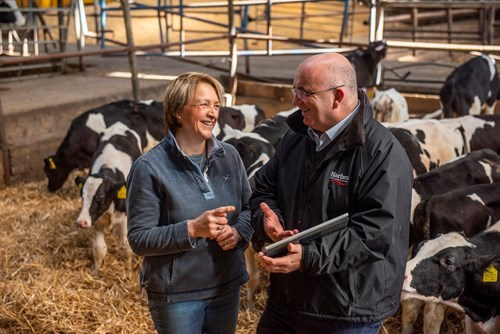 Two years later, individual calf pens – manufactured from recycled plastic – were introduced where calves are reared up to six weeks of age before being batched into groups of 10 to a maximum of 15 in larger straw-bedded pens.

The move to individual pens was made purely down to health reasons. An automatic calf feeder had been used in the past but it became a vector for spread of infection and many of the calves quickly contracted pneumonia. Treatment had little effect. The calves were tested and mycoplasma was confirmed.

“The loss of calves was soul destroying for us. We went right off the feeder, we could never go back to it.” says Pat Wilson who along with Kamca Rackacova looks after the calves.

Since the move to individual pens, losses have been minimal. The calves still have nose to nose contact but no access to suck navels, etc. “They are far healthier and happier.” commented Pat.

Strict attention is paid to hygiene with milk being mixed in a machine and buckets which are all kept scrupulously clean.

“It is really important at this time. Calves can cope with ailments individually but if they get a few at once, it really can knock them back. We really want to give them the best start possible and reduce the risk of contamination, especially now we are using sexed semen.”

Calves are bucket reared with Harbro’s Buttercup Bloom milk replacer which is mixed in an Urban Milk Shuttle supplied by Volac, before transitioning to Buttercup Calf Starter pellets.

Colostrum is fed for the first four days and then calves are encouraged to get sucking, trying them first with clean fingers. As soon as this is established, they move onto milk. The calves are fed on Harbro’s Buttercup Bloom milk replacer. “They progress really well on it,” says Pat.

Calves start off on six feeds of colostrum and on day four, start on two litres of milk twice a day, building up to a target intake of three litres twice a day at 14 days of age. Milk is fed for the first six weeks when they are weaned gradually and transition on to Buttercup Calf Starter Pellets which is fed up to 12 weeks, thereafter, moving to Buttercup Calf Rearer Nuts.

Through a low temperature drying process, the protein in Bloom has improved absorption rates and the higher protein level aids improved frame development.

Features of the Buttercup range include VeO, a unique blend of natural plant extracts which has been shown to reduce stress and increase intakes by directly stimulating the key ‘pleasure‘ areas in the  brain.

“The calves do really well on the Harbro feed, they bloom, they grow, they thrive.” Pat readily admits that she “would not take the risk of trying other feeds.” Her motto is “if it ain’t broke don’t fix it!” 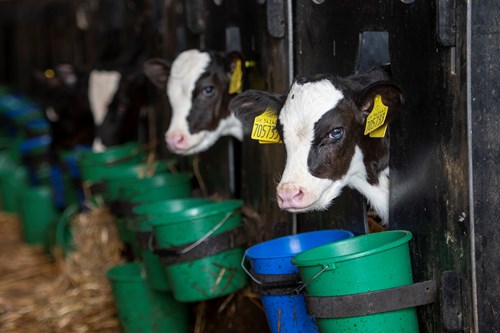 The aim at Carskerdo is to rear them to be able to calve down at 24 months of age, assessing by both weight and size.

Key to achieving this is regular weighing of calves and as part of their management, Carskerdo has joined the Calf+ Monitor Scheme. Launched by Harbro in 2015, it aims to provide an insight into heifer performance and to help pinpoint where management can be improved.

In its first full year, almost 450 calves on 30 farms were weighed monthly from birth through pre-weaning and the data recorded. Enrolling in the scheme is voluntary and the units involved use milk powder and feed compounds from Harbro and a wide range of other manufacturers.

The initial findings show average growth rates in black and white heifers ranged from just 0.44kg a day, on one farm, to more than double that rate at 0.84kg/day on another.

It was also found that almost 70% of the animals across all farms failed to reach daily liveweight gains of 0.75-0.8kg/day – the target growth rate needed for a Holstein to achieve first calving by 24 months at 630kg liveweight pre calving.

“We have done some weighing in the past. Through Calf+ Monitor, we will be able to make sure they are growing as they should.” says Pat Wilson.

“Some, with lower growth rates, are taking up to 30 months to first calving, and that’s six months of extra housing and maintenance feeding costs before they start producing,” said Stuart Cameron, Harbro dairy sales manager.

“We know that it is possible to make big improvements here because it is well documented that early feed conversion rates are optimal and strong growth rates in the young calf have a knock-on effect on lifetime yields.

“The goal now is to bring that knowledge into practice and help the whole group to lift its performance to get closer to first calving at 24 months.”

The survey includes a measure of what milk powder concentrations are being fed, colostrum provision and quality, a cleanliness score and an overview of the housing provided.  The main message from this was the importance of colostrum provision.

“We did find that farms which focused on good quality colostrum provision, as close to birth as possible, had the strongest performance.”

Areas on individual farms where growth rates slow down – termed as bottle necks - have been identified as colostrum quality and provision, health challenges, building environment and milk powder concentration.

The results are sent out every month and each farm receives its data. Also provided are the results for all of the other farms but this is listed anonymously to protect the privacy of the participants, she stressed.

“For the farmers involved, it gives an insight into how their colleagues were doing and helped them focus on what improvements could be made. For us as dairy specialists, it provides an opportunity to identify best practice and pass it on to lift the whole group,” she added.

It is common on farms for young stock to be looked after by the fairer sex and that maternal instinct of knowing when something is not quite right undoubtedly helps. Pat says women have a motherly approach to looking after stock, taking more time to nurse and nurture and, have the experience to know when something is wrong.

”I love the mornings, you can see their heads straining through the pens, looking for milk because they want to be fed! You can just tell if something is starting so once they’ve had their milk, I’ll walk through them to see that they’re all okay.”

390 cows are currently being miked, yielding 9,500 litres and averaging 4.21% butterfat and 3.42% milk protein. The most recent change to management was the introduction of sexed semen in late 2017 to ensure an increased number of heifers.

“We should start seeing the bulk of our heifer calves shortly” says Pat. “Although not guaranteed, this should keep our herd numbers to target and allow us to sell calved heifers and give another income stream.”

“In my mind calves, are the most important part of your dairy operation.  If you don’t have them – you don’t have a future.  So, it pays to look after them right from conception to calving and beyond.  A healthy calf is a wealthy calf!”  This care and attention is obviously paying off with Carskerdo recently having won the Scottish Holstein Club’s Scottish Herds competition for 2018.