Scott Murchie is a third-generation dairy farmer at Gullielands Farm in Annan in Dumfriesshire, where he milks 310 dairy cows and finishes 100 black and white bulls. He also grows 100 acres of barley, all of which is used to feed the cows. Having treated grain with Maxammon for many years, for the first time last year, Scott cut the entire area as wholecrop, which he then processed with the Maxammon. Scott, a former Chairman of the Annandale Young Farmers, explains how it has benefited the cows and the systems on farm as well as the books.

Traditionally Scott bought in caustic wheat to feed the herd, but he was looking to reduce costs and improve efficiency. When Maxammon was introduced to the market they started to treat their own grain to make the most of the cereals they were producing themselves. 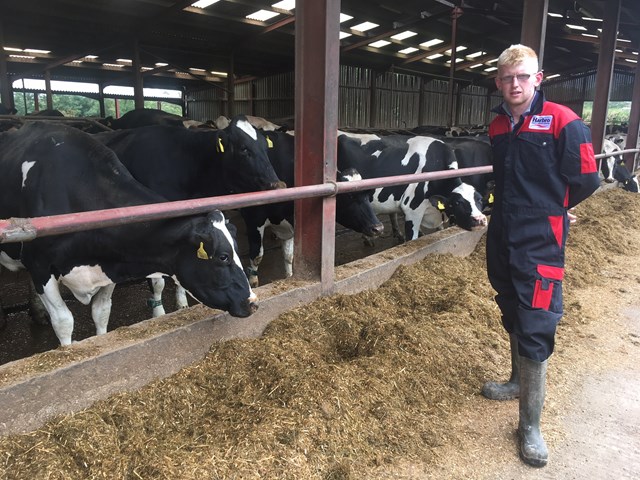 “We started making savings on bought-in feed, and the buffering capacity of the Maxammon grain was also attractive in an acid-rich diet. There’s no doubt, even by eye, the bulls looked and were performing better, and we could reduce the other additives we were buying in as Maxammon covered what the cows needed.” Scott commented.

Scott’s nutritionist is a great advocate of treated wholecrop and encouraged him to cut the barley as wholecrop. Cut at maturity, the wholecrop is then treated with the Maxammon to create a complete balanced diet.

“How I describe it, is that Maxammon wholecrop has the dry matter of straw, with the energy and protein of a good silage combined with the starch levels of maize. It’s an ideal combination. It’s obviously not cheap to treat but the greater return per kilo of dry matter more than balances it out.” he goes on to say.

It took a bit of convincing initially for Scott to cut as wholecrop, but this year he is dedicating even more acreage to wholecrop, Scott says they quickly saw the benefits.

“It almost goes against the grain to take a crop to combine stage and then put it through the chopper but we have definitely seen the advantages. It’s not just the cost cutting; the cow health has definitely improved, overall performance is better and we have found it simplifies systems on the farm.”

The crops can be cut in less time than it would take to combine. There is no baling to be done, and as the Murchies are following it with grass, it’s straight into sowing. There is also no need for bruising.

“It is all very handy - adding Maxammon in with the wholecrop, letting it ensile for two weeks and then it’s stable, and as long as you keep it dry, it keeps indefinitely. We only have one pit, but because it is so quick to ensile it is easily managed. When the spring barley came in we took what we needed for two weeks from the winter barley pile, put it in the shed and then piled the new crop in front. It’s been especially great in a wet year like this as we are not worrying about getting the crop in.”

Although feed costs have to be monitored, the priority for Scott is to have the right feed ration for optimum cow health, fertility and milk production. He saw the milk yield increase by 3 litres/h/d from September 2016 to May 2017 when feeding Maxammon wholecrop, and a consequent increase in the weight of butterfat and protein produced (see table).

Milk quality: Butterfat 3.9%, protein 3.25%. This stayed similar from September 2016 to May 2017 when feeding Maxammon wholecrop but the milk yield increased by 3 litres/h/d during this time. This means that more weight of butterfat and protein were produced.

Scott has worked with the help of Harbro Dairy Specialist Arol Hyslop, who adds:

“Ultimately farmers need to get the best return from their inputs, and treating the wholecrop with Maxammon allows them to maximise on homegrown forage and cereals, reducing the need for additional protein inputs. It also helps the overall wellbeing of the cattle, helping to reduce acidosis risk and promote rumen health, which in turn leads to better quality milk production and butterfat content. Treating wholecrop with Maxammon is an easy process, and it ensiles quickly, which all contribute to a more efficient and productive farming system all around. “